Ashley Tero thought she was simply going in for one last precautionary ultrasound prior to the birth of her now 3-year-old son Cooper. But it revealed that his birth would also be the beginning of his battle.

Cooper was diagnosed with hydrocephalus in Tero’s 36th week of pregnancy, after the ultrasound revealed he had fluid on his brain.

“The only reason we happened to find out was when I mentioned to my doctor my husband is 6 foot, 7 inches tall and I have a six-year-old daughter, and I could tell this baby was bigger than the previous one,” said Tero, a teacher at Allemands Elementary and resident of Luling. “I felt like he was making snow angels at the top and bottom of my stomach. He said, ‘well, you haven’t had any complications, but let’s go ahead and do a last ultrasound.’ So we went ahead with it and it’s a good thing we did.”

The situation was a serious one.

“They were ready to take him that day,” Tero said.

Cooper was not born that day, though, because an evaluation found his lungs were not yet developed enough. But if the fluid situation worsened, his birth would not be able to be delayed. He held up and within a month, he was born after a C-section.

“This poor baby was born and immediately whisked away to the NICU to spend 18 days there,” Tero said. “They had to put shunts in place in his brain and he couldn’t feed right away. He couldn’t come home until he was able to drink some kind of way or use a feeding tube.”

Because of the fluid, Cooper’s head was vulnerable and he had to wear a specialized helmet to prevent damage.

But when he was about six months old, a follow up with a neurologist revealed Cooper was missing his corpus callsum, the part of his brain connecting the left and right side, which affects coordination. The official diagnosis is called agenesis of the corpus callosum, a rare birth defect.

Other complications are that Cooper was born with both of his thumbs tucked into his palms, necessitating surgery, while he also needed another surgery because his condition weakened the muscles in his eyes. He has also suffered seizures.

“He just turned three … he can’t walk or talk really,” Tero said. “He will say ‘mama,’ but not consistently.”

The family got Cooper started in both physical and speech therapy, where he attends a session for one or the other each week.

The eye and thumb surgery addressed some immediate problems, but the thumb surgery put him in a cast that set Cooper back in terms of crawling and sitting up properly.

The family purchased a wheelchair and a gait trainer, the latter in an effort to help him eventually learn to walk. That’s still a possibility.

“Hopefully, he used the gait trainer more than the wheelchair. That would be ideal,” said Tero. “Right now, he kind of pushes himself along, so he’s not using it totally correctly, but something is better than nothing. We hope he’ll walk, but we can’t be sure.”

Concrete information on his condition is hard to come by because, as Tero noted, each case seems unique in its own way. She has been able to correspond with people from other families dealing with the affliction through a Facebook group.

“These people (in the Facebook group) are all over the world,” she said. “It’s considered rare. I know people with hydrocephalus, which seems more common than the corpus callosum. That’s where his rarity comes in. 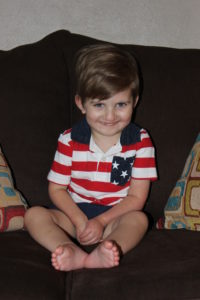 “Right now, (doctors) can’t guarantee or tell us anything, because every case comes with a unique prognosis … some kids can walk, some can’t understand things. Cooper understands the majority of things cognitively. We’re hoping we’ll be able to eventually get him to walk and talk, and that it just will take him a little longer than most.”

Expenses have piled up for the family. While insurance covers some of his direct medical procedures, things like his wheelchair, therapy, the gait trainer and other things related to his care fall outside of that assistance.

A number of people have made an effort to help. A friend of the family, Jeri Cooper of Des Allemands, helped pay for the wheelchair by holding a Super Bowl football pool to raise funds.

And on March 10, Today’s Car Care will host a car show fundraiser to help the family cover expenses.

Admission to the show will be free, with funds raised through the purchases of food, raffle tickets, donations and entries to the car show. A monster truck will also be on hand as a special attraction.

“We really wanted to help when we learned their situation,” said Bailie Bourg of Today’s Car Care. “He needs things for his daily life that insurance isn’t going to fully pay for, and that can be a huge financial responsibility for any family.”

Before joining Today’s Car Care, Bourg was a physical therapist assistant who worked in pediatrics, so she’s familiar with the burden that can come with these mounting expenses.

“I came across a Facebook post where someone was raising money for them through a football pool, and when I became aware insurance wasn’t covering things like the wheelchair or his speech device, I went to my dad and said, ‘We need to do something for him,’ Bourg said. The fundraiser is scheduled 11 a.m. to 3 p.m. at Today’s Car Care in Luling. Bourg said TCC is asking those entering cars for a $50 minimum donation. Food prepared by Dat Dad’s Club of Luling will include pastalaya, hamburgers, French fries and hot dogs. Today’s Car Care is also accepting donations from local businesses for items to be raffled off.

Tero said she and her family have been “blown away” by the support.

“Just by the sheer thoughtfulness of it,” Tero said. “To have so many people wanting to help, it’s humbling. This, something so big … it’s such a blessing.”

Destrehan leaves no doubt in battle of unbeaten teams

There was a primetime, big game atmosphere at Joe Keller Memorial Stadium on Friday night – even after the District 7-5A championship showdown between undefeated rivals Destrehan and East St. John began. […]