Six-year-old Caidan Scallan grew up with horses and cattle, but he wasn’t the kind of kid his parents thought would get into “mutton busting.”

But it’s just what Caidan asked to do at the recent Houston Livestock Show and Rodeo in Texas, and what he did was amazing.

“There were 21 kids meeting the weight requirements, mostly from Houston, and then there was Caidan – the only one from Louisiana – in that category,” said Candi Scallan, his mother. “When he was getting on the sheep, he said, ‘They told me to hold real tight and that’s what I did.’”

Candi filmed the ride and posted it online.

“People are seeing this video and praising him,” she said.

He did so well that a clown had to take him off the animal.

The Mimosa Elementary School student was a bit speechless when he first came off his ride, but Candi said she could readily see the pride all over him.

“It was adorable,” she said adoringly of her son. “We expected him to have fun, but he did so well. It was surprising.”

When the announcer was done, little Caidan had won first place in mutton busting, which is the children’s version of bull riding or bronco riding but with sheep. He was handed a big blue ribbon and a champion belt buckle. 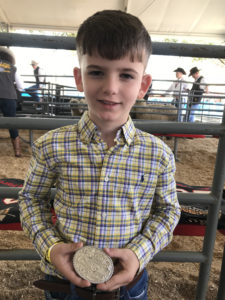 Mutton riding has been described as “the toughest sport on wool.” A sheep is held in a chute by a handler and a child placed on top of it in a riding position. The chute opens and the ride begins.

Although her son enjoyed riding their horses, as well as being with his grandfather and his cattle in Des Allemands, she readily explained they aren’t really agricultural people. They live in a neighborhood in Luling and can’t have a lot of farm animals, but they explained this to their children.

Mutton busting was a real accomplishment for Caidan. He loves and knows animals, but she said he never seemed adamant about it.

At the rodeo, Candi said all she could think about was her son not getting hurt, but he wasn’t hurt and he actually scored a 95-point ride.

When they returned to the hotel, Caidan asked for a new belt for his buckle. He wore it with his pants and later, when he changed into shorts, he wore it again.

As the mighty Caidan pranced about brandishing his championship buckle, Candi told her son, “Yeah, buddy, you did it.”

St. Charles Parish Public Schools are still recovering over a year after Hurricane Ida dealt a devastating blow to the parish. […]