With family living in the Lake Charles area, Emily Gautreaux quickly heard a firsthand account of the damage wrought there by Hurricane Laura.

“My sister told me the pictures don’t do anything justice. It’s just so much worse in person,” Gautreaux said. “She said it’s like a warzone.”

Though her family was among the lucky ones not harshly impacted, Gautreaux is one among several locals attempting to make a positive difference for people in that area. She has taken to social media to ask for supply donations for those impacted by the storm, with an aim to deliver the supplies herself on Friday. Among items requested are gallon jugs of water, baby and antibacterial wipes, hand sanitizer, flash lights, garbage bags, gloves, batteries, cleaning products and non-perishable food items, among other helpful aids to the rebuilding and retooling efforts of those hoping to bounce back quickly after the powerful storm.

Laura made landfall Aug. 27 near Cameron, Louisiana, and peaked as a Category 4 hurricane. It killed eight people and caused an estimated $8 billion in damage on southwestern Louisiana and Southeastern Texas.

“So far, people have been pretty responsive,” Gautreaux said Sunday. “There have been a few monetary donations, a few promises of water and baby wipes … I just wanted to get this out there and see what we could gather.

“I just feel like anytime something like this happens, anyone who can help should. It could have easily have been us … we were bracing for it a few days out from the storms.”

The St. Charles Parish Sheriff’s Office also sent assistance on Friday, as a convoy of employees were sent to assist with emergency response in Calcasieu Parish for Laura’s aftermath. 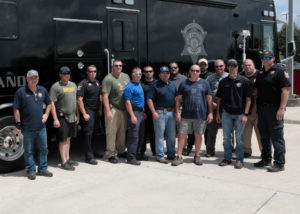 The group was selected from several volunteers and brought equipment consisting of a Mobile Command Center, bunk houses, generators, fuel, food, drinks and other necessary supplies. The Sheriff’s Office transported more equipment and supplies as needed during the volunteers’ stay there.

“By supplying our own equipment during our response efforts, it allows our agency to be 100 percent self-sufficient so that we’re not taking from any resources made available to the first responders and citizens of Calcasieu Parish,” said Sheriff’s Office spokesman Cpl. James Grimaldi.

St. Charles Parish Sheriff Greg Champagne called it “an honor to help other agencies and communities to ensure safe and timely recovery of services.”

The response team was selected with representatives from several different divisions to ensure no disruption to local services.

Jean Day Elliott and Fredie Terral Seab are once again side by side – their friendship that started over 70 years ago at Louisiana College has been reignited at Ashton Manor Assisted Living and Memory Care in Luling. […]

It is a tradition of the St. Charles Parish Public Schools System to annually host ArtsFest – a weekend set aside to showcase talent from the district’s theatre, band and choir groups, as well as visual art presentations and dance performances from the district’s schools and learning centers. […]