After a two-year wait, the Krewe of Des Allemands will roll again Sunday at 1 p.m., marking the community’s 63rd annual Mardi Gras celebration.

The threat of inclement weather forced the cancellation of last year’s parade, the first time the parade had ever been sidelined due to weather. But Mitzi Tregle, Krewe of Des Allemands spokeswoman, said this year the good times will indeed roll again.

“Rain or shine, we decided,” Tregle said. “It may take a tornado to stop us this time. Last year was the first time we’ve had to cancel, so we’re definitely excited for this year.” 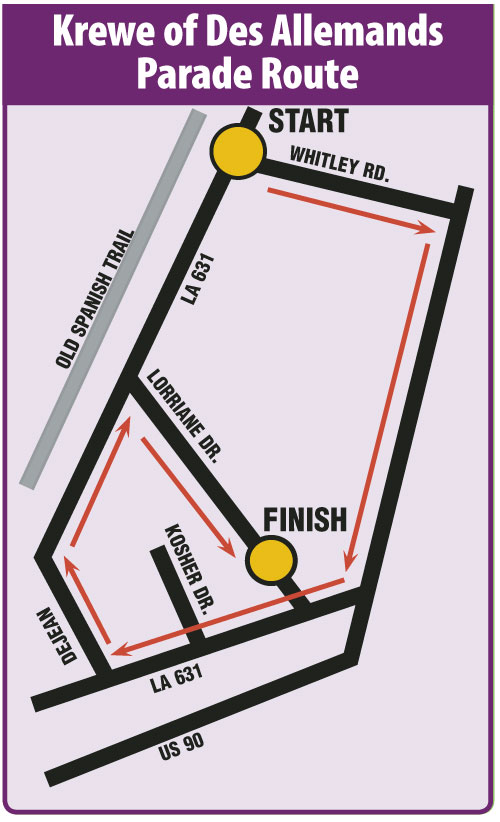 The parade is set to roll beginning on Whitley Road before traveling up to U.S. Highway 90, turning into the town’s business district, heading down Dejean Street toward Old Spanish Trail and then backing up Lorraine Drive to the highway.

Not only is the parade back, but there’s more of it than before. Tregle said it will be a longer parade with more participants than in years past—last year there were about 20 to 30 units planned between floats, fire trucks, school dance groups and bands.

“We have a couple new entries this year,” she said, noting some new dance groups and the participation of the St. Charles Parish Animal Shelter with some adoptable animals along for the ride. “We have most of our returning floats back, our dependables who never let us down, love the parade and ride every year. We’ve had a lot of interest this year.”

Hahnville High will be among those represented, with its band and ROTC both in for the festivities again.

The king and queen of this year’s krewe are Des Allemands natives Michael and Mary Ann Cortez of Des Allemands. The grand marshals are Jane Fonseca and Ruby Fonseca. The four were chosen last year, but unable to ride when the 2018 event was cancelled.

Tregle said it was a tough decision to cancel last year’s parade and one made only when it was clear that there was no way to ensure the event could be held safely.

“Rain or shine, we decided. It may take a tornado to stop us this time.” – Mitzi Tregle

“We pushed it as long as possible to make a final decision, and it was heartbreaking for us,” Tregle said. “It wasn’t a decision we wanted to make, but if someone were on the route or watching and gets hurt, not only could that have been avoided but then you can’t have the parade anymore at all.”

She said she thinks the year off, as well as the relatively late time of the season the parade falls on, will attract one of the event’s larger crowds.

“We just find later in the year, we tend to have better turnouts. So we should have a great crowd, I’d think,” she said.

To join the parade, contact Mitzi Tregle at dacarnivalkrewe@yahoo.com.

Rain or shine, the good times will roll

After 80 minutes of soccer, archrivals Hahnville and Destrehan finished at a stalemate. […]

Signature throws, colorful beads, delicious food and a whole lot of fun – these are just a few of the things that make Mardi Gras special. And while the festive gatherings that usually facilitate those things – parades – have been cancelled throughout the New Orleans region for 2021, there is now an alternate plan to still celebrate the holiday. […]