Matt Jewell will remain in the St. Charles Parish president’s race after a lawsuit asserting he was not qualified to run was dismissed in court Wednesday (Aug. 21).

LeBoyd has 24 hours to appeal the decision.

Jewell, 30, is a district director for U.S. House Minority Whip Steve Scalise, but maintained he has been a lifelong resident of St. Charles Parish. He faces incumbent Larry Cochran and Reanda Fields-Pierre in the parish president race.

LeBoyd maintained Jewell has been a resident of the District of Columbia and employed by the U.S. Department of Energy in Washington, D.C., at least until 2017.

The parish’s Home Rule Charter states a parish president candidate must be a registered voter and live in the parish for five years “prior to his assuming office.” 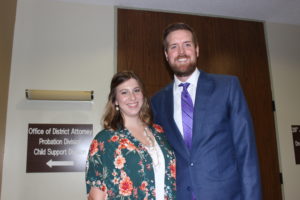 Jewell, along with his wife and mother, testified to his maintaining 22 Cathy Drive, Luling, as he and his wife’s residence in St. Charles Parish.

The case was heard in expedited proceedings per the law on elections. Jewell was tasked with producing information proving he is a registered voter and has lived in St. Charles Parish for five years.

Simpson also ruled he is a registered voter.

Simpson, formerly of the 17th Judicial District in Lafourche Parish, was appointed to oversee the proceedings. Judicial judges Emile St. Pierre, Lauren Lemmon and Timothy Marcel recused themselves from the case.

Before heading off for school each morning, Kailie Carrigee has long heard the familiar refrain from her mother, Korie: “Be kind. Be humble. Be generous.” […]

Many St. Charles Parish students will return to their schools and classrooms today (Aug. 6) for the 2020-21 school year, while others are set to step back on campus tomorrow. And some will begin from a brand new, but familiar classroom setting – their homes. […]

Grocers face a new challenge – will there be football?

On top of the already existing challenges of running a business, grocery store owners have had unique challenges during the coronavirus pandemic. […]