Minutes after taking the oath of office as St. Charles’ parish president, Matt Jewell opened his comments with a tribute to the late Albert Laque and outlined his plans for taking office tomorrow (Monday).

As you may know, Mr. Laque passed away on Oct. 27, 2018,” Jewell told a crowded Edward Dufresne Community Center in Luling. “President Albert ‘Punk’ Laque devoted his entire adult life to public service and to the people of St. Charles Parish.”

“President Laque gave a great deal to this parish and his legacy will live forever.,” Jewell said. 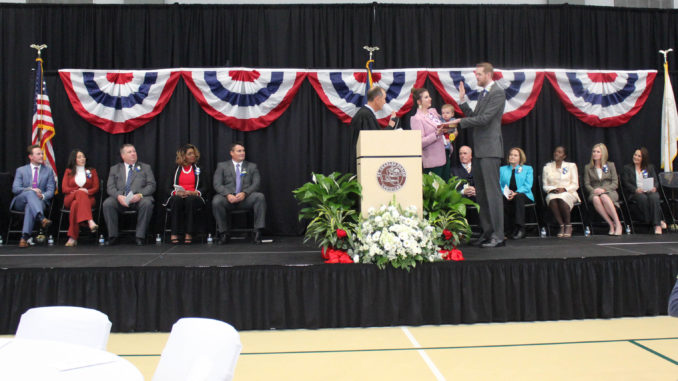 Sunday’s inauguration also was highlighted with comments from keynote speaker Congressman Steve Scalise, who Jewell worked for as a district director.

“It is truly an honor to stand before you today as the sixth president in our parish’s history,” Jewell said. “As a lifelong resident, I know that St. Charles Parish is a great place to live and work … but I also know that we can always improve.”

Jewell announced his intent to create and execute a comprehensive plan to upgrade aging infrastructure and create a flood protection program that aggressively seeks to close the West Bank levee system and work with FEMA to lower flood insurance rates for residents.

Plans also call for the administration finding innovative solutions to address drainage issues, as well as create a sustainable recreation program emphasizing “quality over quantity” for all residents,.

He further outlined plans to diversity the parish’s economy through “an aggressive economic strategy that brings new high skilled and high paying jobs” to the parish.

To help drive these goals, Jewell said he has “assembled a team that values public service as much as I do. With the help of a diverse transition team, each of them has been selected to serve in their positions. They will work closely with our dedicated civil servants to bring the highest level of customer service to government and I look forward to you meeting them.”

Jewell said his vision is to promote and grow the parish economy that will “foster a standard of living that preserves the integrity of our unique rural setting supported by high quality housing, well-structured neighborhoods, a trained workforce, and modern goods and services.“

He said he wants to “create a sense of community pride. Ultimately, I want there to be a feeling of unity exhibited by residents who are happy to live and work in St. Charles Parish.”

Jewell also thanked his family for their support in the campaign and especially his wife, Cera, for the sacrifices she made during this time.

“Some of you may not know this but when I decided to run my wife was about 7 months pregnant with our first child. When I announced publicly our newborn son, Aiden, was only two weeks old. She did an incredible job taking care of our baby while campaign activities kept me away. I will forever be grateful to her for always being my strongest supporter.”

The inauguration also included the presentation of colors by Destrehan High School’s Air Force ROTC, and performances by the Hahnville High School choir, and HHS Band.

A plan to provide free meals for the students of St. Charles Parish schools was suspended last week after a district employee reported he or she had displayed COVID-19 symptoms, but it will be back on thanks to an agreement between the school system, United Way and Second Harvest. […]

Faith got the golden ticket

DESTREHAN – The first time she performed on stage, she was 10 years old and it was at a 4-H talent show at Destrehan High School. This week, millions around the world watched as she took the televised audition stage as a 20-year-old on the singing competition show American Idol. […]

Once primarily associated with poker games and sitcoms, the phrase “full house” strikes people a little differently these days — for many families, it’s currently the way of life. […]