Karen Bellow said her baby Jaxon has made incredible progress, and she doesn’t think he’s done it alone.

“I highly believe that with everyone praying for him, it made him better,” Bellow said. “We’re blessed.”

Only a year old, Jaxon has already proven to be a tough youngster capable of batting through adversity. The Destrehan infant has suffered from disease in both of his kidneys — hydronephrosis and vesicoureteral reflux — which has necessitated medical intervention, including surgery. He’s not only faced discomfort since birth, but also the prospect of losing a kidney.

Bellow didn’t know where fate would take her son after he had surgery in May of last year, but she and Jaxon received some fantastic news in mid-July: the swelling in his right kidney has gone down and tests completely normal. He’s been taken off of antibiotics and if his body responds positively to that — a urinary tract infection would represent a major setback and necessitate more surgery — he will be largely in the clear.

The tract infection is the last obstacle to clearing the kidney reflux, while the hydronephrosis hurdle appears to be cleared. He’s been off the antibiotics since July 15 and there have been no setbacks so far.

“There’s a light shining through the tunnel now,” Bellow said. “We can see the end … it’s not quite there yet. It just depends on his body. I’m relieved and thrilled (at his progress).”

Since birth, Jaxon has had pressure in his bladder — the comparison Bellow noted is he felt the equivalent of someone holding their urine for too long and constantly feeling like it must be relieved, but being unable to do so. Hydronephrosis causes fluid buildup in the kidney due to backed up urine, while vesicoureteral reflux means there is a backward flow of urine from the bladder to the kidney. 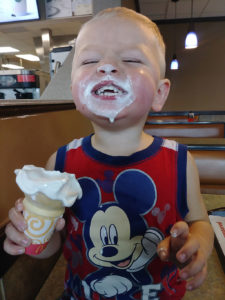 “He doesn’t feel that (pressure) anymore, at all,” Bellow said. “The doctor said it will be difficult to potty train him again, but beyond that, he’s totally fine. He doesn’t cry as much. He seems to feel much better.”

His kidney issues were not uncommon, to a point, but most children quickly grow out of it. Jaxon had not. At the height of his struggle, he was able to walk normally, but he would lay on his side when sleeping, something Bellow thought may have been attributed to his discomfort.

She credited Dr. Aaron Martin, urologist at Children’s Hospital in New Orleans, for his key role in guiding Jaxon to this point.

“Our family is extremely grateful and blessed to have such an amazing doctor who takes his time to make sure all of our questions are answered and constantly giving us reassurances,” Bellow said. “He gave us hope and stood by our side. We owe so much gratitude to him and the entire staff at Children’s Hospital.”

The antibiotics he was taking every day left him vulnerable. At one point, Bellow set up a GoFundMe to offset some of the medical expenses necessary to make Jaxon well.

Now, her baby boy might just be close to 100 percent healthy.