Lisa Perrot may not work as a doctor or nurse, but to her coworkers at St. Charles Parish Hospital, she’s every bit the hero.

They were determined to lend her a helping hand when she needed one.

Perrot, 62 and a housekeeper at the hospital, has walked to work, to her mother’s house and to the grocery store for some time – but no more. The EMS team at the hospital banded together to raise money in order to buy Perrot a car, which was delivered as a surprise to her on Monday. In one week, the team raised over $3,900, paying for the vehicle, a title transfer and a start to insurance. On top of that, others stepped in to give free car detailing, gas cards, extra cleaning supplies and even a cake to celebrate the occasion.

Daniel Salazar, a member of the EMS team who helped organize the effort, said the inspiration came one night after he gave Perrot a ride home from work one night.

“Out of nowhere she asked me, ‘Do you know why I carry an umbrella, even when it isn’t raining? It’s so the sun doesn’t feel so hot. I use it as shade,’” Salazar said, noting the obvious follow up question of whether Perrot drove. 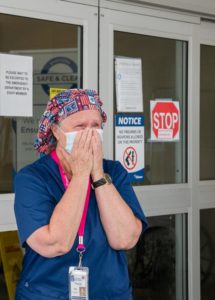 As it turned out, she did drive and kept her license up to date but could not afford monthly payments on a vehicle nor the cost of insurance added on to that. Salazar brought the conversation up to his co-workers.

“We’ve all been saying we needed to do something for her, as many of us brought her to work and back home. So that night, we made a plan and followed through,” Salazar said.

Like so many health care workers worldwide with the onset of COVID-19, Perrot found herself working in an environment that potentially threatened her own health, all while doing her part to facilitate an environment for patients that best protected them and their recovery. Perrot never complained or offered anything but a positive attitude, and her demeanor rubbed off on those around her.

That was one reason Perrot is beloved by her hospital family.

“She’s a sweet, compassionate, sincere woman who doesn’t sit down until she gets home,” Salazar said. “She doesn’t talk much and is so appreciative of anything you do for her. She says thank you a million times a shift. I don’t think she knows it, but she really sets an example to how we should all treat each other.

“If Miss Lisa sees we’re having a busy, stressful night, she wouldn’t ask for a ride home. She’d sneak out without wanting to bother us. We tell her all the time, don’t hesitate to ask, but she doesn’t want to be a bother. Employees wouldn’t be concerned about being late to work a few times if it meant that Miss Lisa got home safe … she’s probably the most deserving person I know here. I know I speak for all of us when I say we would do anything for her whenever she needed help.”

The fundraising efforts included a GoFundMe that quickly raised nearly $3,000, almost $1,000 above the initial goal. One doctor paid to have her car fully detailed. Another payed to have the struts replaced. And the seller of the vehicle, Tammy Silbernagel, dropped her asking price by $1,000 after learning of the EMS team’s plan to help Perrot.

“Our EMTs and paramedics, administrative staff and so many other departments throughout the hospital have been completely helpful and willing to help with anything we needed. It’s just been incredible,” Salazar said.

For Salazar, the cause was also somewhat inspired by a personal experience, one of his first as an employee of the hospital and one that made a lasting impression.

Shortly before he began working there in May of 2019, he was awarded domiciliary custody of his three children after a three-year dispute. The process was taxing and that Christmas, he found himself well short of what it would take to purchase his children gifts.

“I wasn’t even able to fill my gas tank up without sending my bank account into the negatives,” he said.

His co-workers, who had only known him for approximately six months, began a collection for him to allow Salazar to give his children the best Christmas possible. He was called to the nurse’s station and was told every year the team collected for an employee during the holiday to help with gifts, bills or anything else needed. 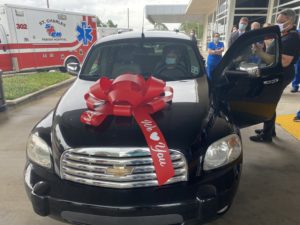 “I took the last $20 out of my pocket and was handing it to her … she told me to put my money away and that everyone collected for me. I was speechless,” Salazar recalled. “I didn’t know what to say. I cried. For a group of people to do something so kind for someone they barely knew was a blessing … these co-workers became my family.”

He became determined to pay that forward. He’s done that and says he and his co-workers want to continue to do so and help even more people when possible.

“When you’re blessed with something, it’s your obligation to help someone else if you can. There’s no greater feeling,” Salazar said.

Inspired by weight loss, chiropractor determined to help others

Melissa Myers feels far more joyful when she looks in the mirror these days, and now she’s working to help as many others as possible share that feeling. She’s long been passionate about health and […]

Keva Peters Jr. saw his interest in film sparked while a student at Destrehan High School, and it didn’t take very long for that spark to create an inferno. […]

Valero was again recognized for its vital community commitment by The Civic 50, a list of the 50 most community-minded companies in the United States. The list is compiled by Points of Light, the world’s largest organization dedicated to volunteer service. […]