To say Jai’lyn Williams is driven is an understatement.

When Williams begins studying pre-law at Xavier University of Louisiana this year, she’s starting as a sophomore. She graduated from Hahnville High School with enough college credits through the school’s Dual Enrollment Program for this achievement.

“I feel pretty great that I was able to complete so many credit hours in the program toward my degree,” said Williams, daughter of Joseph and Melissa Williams of Hahnville.

The Hahnville graduate was willing to go “the extra mile” to reach her goals and gain skills like multitasking.

“You don’t interact with the teacher as much, where it has to be disciplined and being about handling the workload on your own,” she said of dual enrollment. “I love being in college settings and it taught me a lot of maturity and how to be better prepared. It also taught me to make sure I take things seriously. You don’t want your grades to slip.”

And her direction in life became equally clear to her. 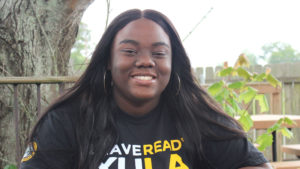 “It’s just something I wanted to do. Medical runs in my family, but I went a different route. I love the criminal justice side of things and enjoy watching court shows and stuff,” she said. “I thought it’d be a perfect career for me and, eventually, I’d like to become a judge.”

Williams’ achievements shined at HHS as a member of the Superintendent’s Student Advisory Council. She welcomed the opportunity to serve with students from both sides of the river to discuss student climate, ways to improve the schools and what’s efficient about them.

“It was pretty interesting,” she said. “I learned teamwork and how to be open minded to other people’s ideas and to be honest and to be sure you speak without judging someone.”

The achievement fit with her goals.

“I feel pretty great that I was able to complete so many credit hours in the program toward my degree.” — Jai’lyn Williams

“I definitely wanted to have at least a 4.0 GPA,” she said. “I also wanted to be more involved at school, with BETA and the Advisory Council and in theater.”

In eighth grade, Williams was considered gifted in theater and was advised it would be a good fit.

“I loved Mr. and Mrs. Harms,” she said of her theater teachers. “It worked out well. I stayed in it all four years and it taught me more about being confident as far as stage, monologue and acting.”

Most of Williams’ work was as costume supervisor. She spent time in wardrobe and building sets, and it worked better with the Dual Enrollment Program and she still benefited from the environment.

Overall, she built on those experiences.

“I enjoy the teachers, having a good education and good environment that I was comfortable being in,” she said. “The friends I met, including those from other schools, taught me a lot of life lessons.”

And from there, Williams said she’s ready for the future.

“It shows I’m moving on to the next chapter and the adult world, and I’m getting older,” she said. “Things are going to be different … waking up at 6 a.m. for classes and working eight hours a day. It’s going to be a different ballgame.”

Teresa Folse and her husband Roger were just arriving home from dinner on the evening of Jan. 17 when they horrified to find their family cat, Harley, on the floor of their bedroom and suffering from a puncture wound. […]

Emile and Beatrice Buras, this year’s king and queen of Lul, will have to search out plenty of people in the crowd when they roll this Saturday in the Krewe of Lul.More than 100 family members will be in attendance to see them when Lul rolls this weekend, and the Luling couple is excited to begin the festivities. […]