For much of his life, Tim Roberts has starred on the gridiron, be it as a star linebacker at Hahnville High School or as a record-setting safety at the University of Buffalo.

These days, Roberts is starring somewhere else: the screen. Roberts is featured in the Disney original movie Safety, which has been streaming on Disney Plus since its Dec. 11 release.

The drama is based on the story of former Clemson University football player Ray McElathbey, who overcame a difficult home life and several adverse situations to take the field for the Tigers. The spot as an extra was a natural fit for Roberts, who tried out and was selected to be a member of the Clemson team in the film.

Roberts spent two months in Atlanta for the filming, staying with a friend of his he met in college, and said it was a very positive experience. 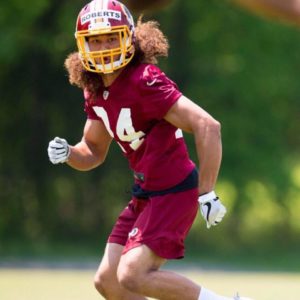 “It was like a real game,” Roberts said. “You had 60, 70, 80,000 fans in Clemson Stadium, a packed crowd … we all got riled up before the game. At the end of the movie, you can see me coming down the hill and jumping into the camera … it was pretty nice. We were out there, the crowd’s going crazy and you get that feeling of actual contact out there, the real deal.”

He was among those selected from a tryout group of about 300 people, with 12 selected to represent Clemson in the movie, while others earned spots on the opposing team and a practice team.

Roberts, who two years ago was in NFL rookie camp with the Washington Redskins, found the transition rather easy. Elements of the tryout were like that of the NFL Combine, with drills testing the skills of those involved.

“The coach was actually getting on guys … telling everybody to stop, ‘if you aren’t going to take this serious, you better go home right now.’ So I go into my routine at that point. I got up to run the 40 and I killed the time. He gave me a ‘That’s what I’m talking about!’ and started using me as an example before the other drills.”

Some parts of it were more taxing, but he was more than OK with it.

“There were days where you had practice, then you had filming, so these can be 12 hour days, to 9 or 10 at night,” Roberts said. “But for me, that was kind of just second nature, because it’s what I’m used to and what I’d been doing. Plus, more than eight hours is overtime … so no complaints, here.”

As it turned out, Roberts got to “play” his position on film here, safety, just as the McElathbey character played, so the two are on screen together a few times.

The acting job was a good land for Roberts. It also wasn’t his first. 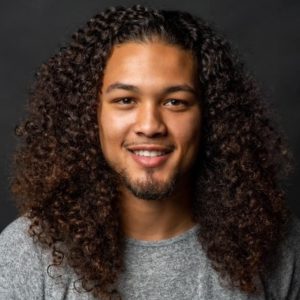 The pro athlete continued to pursue the NFL after he was cut from Redskins camp in 2018, and was set to begin play in a new spring football league, the APL (American Patriot League). But the inaugural season in 2019 never got off the ground – the league suspended operations and is planning to begin play in 2022.

But that left Roberts without a clear direction for the first time in a long time. He took a job working at a TGI Fridays as a waiter and a bartender, something he intended to do for just a few weeks until the league started up, but plans had to change, and he ended up working there for about a year.

It was a fortunate turn, though.

“It just kind of snowballed … I started getting a lot of attention,” Roberts said. “People were calling me Aquaman, or Jason Momoa, ‘Are you a professional actor?’ Things like that. And one day a young lady comes in there and says, ‘here’s my number, here’s my info, you don’t need to be here, I’m going to get you into acting and modeling.’ She gave me a card and from there, I got into it … I really fell in love with it.”

Roberts has been part of several movies since then, including some short films, and also some television, including a spot on NCIS. He’s also done reoccurring stage play work.

Much of the roles are as extras, but he’s also landed speaking parts as his star grows. He’ll have a supporting role in an upcoming action/drama film that was shot in Baton Rouge, “Opps.” He’s been in a commercial starring Brett Favre. And he’s also doing modeling work.

Roberts hasn’t ruled out a return to football to chase his NFL dreams, but COVID-19 has blocked some avenues for the time being.

But, as they say, when one door closes, another one opens – and in some cases, football helped to open one.

“I wasn’t going to let this one (Safety) pass me by, because this was a football role. And now that I’ve done this one, I feel like I’m in a really good place,” Roberts said. “I’m someone they can hit up for every football movie they have now.”