The Hahnville woman and the best friend of Eirich’s mother, Gena, helped raise more than $30,000 for Nicholas’ family in early 2019, when the then 14-year-old was diagnosed with heart failure and needed a life-saving transplant. Eirich got the transplant, the surgery was successful, and things progressed for the better.

But Eirich, now 16, was unfortunately not done with this fight.

Approximately 19 months after being diagnosed for the first time with heart failure, Eirich began to feel sick on a late Sunday night in September. He contacted his cardiologist who advised him to seek hospital care. Upon arriving, he received frightening news.

“They told him his body was in severe rejection of his heart,” Northcutt said. “They gave him a 50 percent chance to live.”

He was intubated and put on life support immediately, and over the course of the next two weeks his body would battle a litany of serious problems. He went into kidney failure. He developed infection where tubes were inserted into his chest for life support. He suffered severe muscle damage to his legs and a lot of muscle had to be removed. He developed a resistance to one of his anti-rejection medications.

Through it all, he had to battle through with more support coming from afar than before – due to COVID-19 precautions, he could not have visitors as frequently, Northcutt herself noting she was at the hospital with the family for much of the initial situation, but could not be this time.

There was real fear Eirich would need another heart transplant. Thankfully, it wasn’t the case – medication adjustments and treatment over his hospital stay helped him turn the corner.

“He’s able to tolerate his medicine again,” Northcutt said. “His kidneys can function … he’s been able to get the stitches out and start walking again. Things are getting under control. He’s still struggling with diabetes and a few other things, but those are baby problems compared to heart rejection. He’s an incredible story.”

Northcutt believes he had some divine protection. Eirich’s father Ross, while attending a vigil held for Nicholas, came across a woman who herself had a scar across her chest from an apparent heart surgery.

“She told him, ‘Jesus told me to tell you that Nicholas is going to be OK,’” said Northcutt. “He had to go back into church to get his phone, and as he turned to walk away, he said felt this sense of calmness for the first time since all of this started. He looked back and she was nowhere to be found, like an angel. And things started improving from there, like a miracle.”

Nicholas was born with a congenital heart defect that required open heart surgery at just nine days old. He not only survived, but appeared to be totally healthy, though he has gone through routine medical checkups in order to ensure it remained the case. It did until January of 2019, when Gena and her husband, Ross, learned Nicholas’ heart was failing. He was immediately transferred to Ochsner’s main campus hospital in need of a heart transplant. It was unknown, initially, if he was even a candidate to be placed on the transplant list due to a complication caused by his condition: his lungs were struggling because of his weakened heart, making it questionable if he could make it through the transplant. It was ultimately determined he would be able to endure it, though there were a few scares that his body was rejecting the heart. 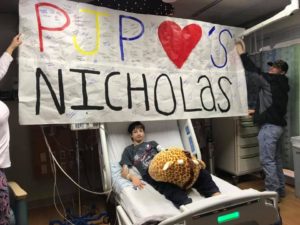 He survived, just as he did this year. But his 2020 scare served as a sobering reminder that this will be a constant process.

“Your body is constantly trying to reject a new heart … it can be 10, 15, 20 years and it can reject it,” Northcutt said. “He’ll get to where he can go less often and not have to live at the doctor’s office, but it’s something that has to be monitored.”

As she did the first time, Northcutt established a GoFundMe page (titled #teamNicholas – the journey continues) to help the family with the significant medical expenses incurred. She noted it was a particular strain as Gena Eirich was unable to work during the situation as she stayed at the hospital with her son. The fundraiser has raised nearly $10,000, while others have contributed at blood drives done to benefit the Slidell teen, both through blood and financial donation.

“So many people have been touched by their story … it’s amazing to see communities coming together, from people who will never even know him to others who see him every day.” Northcutt said.

Northcutt grew up with Gena, and the former considers the Eirichs family. She said it hurts to see them having to battle through this situation for a second time, and said she wanted to do whatever she could to help.

“It’s just unfortunate that when things like this happen in life, the inevitability is you still have bills, children who need you … you still have to sustain yourself outside of this horrible incident. I just wanted to help them any way I could and take a small fraction of stress away.

“He’s still got an uphill battle ahead of him – but he’s alive.”

“This was traumatizing … I’ve been through some things, but this had to be the scariest experience of my life.” […]

The St. Charles Parish Sheriff’s Office is seeking the public’s assistance as a result of a shooting which occurred Sunday, July 24, around 8 P.M. along LA Highway 3127 between Taft and Hahnville.   […]