Not everyone envisioned the future Becca Hillburn saw for herself.

Hillburn, a Hahnville High School alum, grew up hearing she should put aside her hopes of becoming a professional comic artist one day and perhaps pursue a more traditional line of work.

“People really didn’t get me,” said Hillburn, on the verge of publishing her second graphic novel, 7” Kara. “I’ve always kind of been a nerd. I fell in love with comics when I was 13 … a lot of people picked on me for wanting to go into this world, I think because I strayed from the pack. 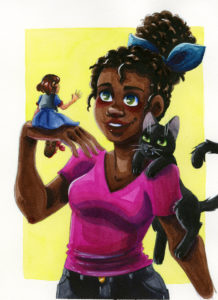 “They didn’t know anyone who was doing it. It was kind of like saying, ‘I want to be an astronaut.’”

But Hillburn did make it, as her published work can attest. 7” Kara showcased not only Hillburn’s artistic and storytelling talents, but also her hometown, as the story is set in Hahnville.

“I wanted to portray Louisiana in a different light than we see a lot in media,” said Hillburn, who currently lives in Tennessee but is in the process of moving back home. “I’m always surrounded by people who think it’s all about Bourbon Street, as if it’s always Mardi Gras or we get drunk all the time. And I get it, but there’s way more to Louisiana than that. The people are just a little friendlier and the food’s just not the same anywhere else.”

7” Kara is the second book in Hillburn’s graphic novel series about the character and the world surrounding her. Kara, as the name suggests, is seven inches tall, making for a much different world to experience.

“She wants to get out and meet humans … she doesn’t really have a whole lot of fear, which for someone seven inches tall, can be not so great,” Hillburn quipped, alluding to the dicey situations her protagonist might find herself in.

From a storytelling standpoint, Kara’s size offers Hillburn some unique avenues to explore, and not just through text. Hillburn is able to contrast size between characters to show where a power dynamic may stand, or how Kara might feel in a particular moment.

The ability to combine the visual medium with written word is something Hillburn said is incredibly freeing. 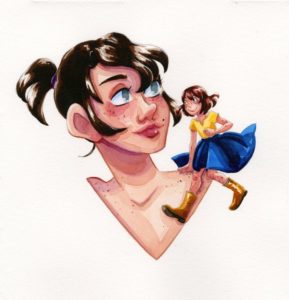 “It even allows you to overcome language barriers and transcend different reading levels. Everyone can grasp the story and what’s going on,” she said. “When you combine the visual art with text, you can tell deeper, more nuanced stories.”

The chance to tell these stories through the comic medium represents the realization of a dream for Hillburn, and she has worked toward helping young people in St. Charles Parish potentially do the same in the field – even as she’s lived out of state. Hillburn teaches comics and watercolor through the St. Charles Parish library system, while she also utilizes YouTube and a blog to share her wisdom.

Hillburn’s family still lives in the area, and she’s long hoped to be able to return. For that reason, she kept an open line of communication with people in the area about potential job opportunities, for example the school system – Hillburn’s mother was a teacher at J.B. Martin for approximately 20 years, for example. The library was another place of interest, and her persistence paid off as she’s been teaching classes online through the library system for some time now. 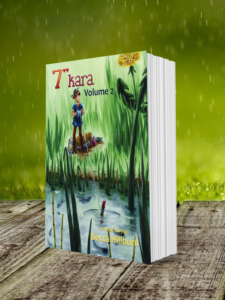 “I love working with kids. They’re so amazingly cool … they don’t have preconceived notions,” Hillburn said. “When it comes to drawing, a lot of adults have decided they can’t draw and don’t put in the time to learn. Kids will try. It’s reinvigorating. Seeing how they respond to art kind of gives me a new will to keep making stuff for them and to keep teaching them.”

She estimates book two in the 7” Kara series will be out before December. Book one can be found via her website, 7inchkara.com, while it is also in circulation in St. Charles Parish’s libraries.

Upon moving back, she’s hoping to expand her teaching efforts as well, and ultimately hopes to see more artists from Louisiana joining the comic artist ranks.

“If this is something you’re interested in or wanting to pursue, there is so much room to tell a story,” Hillburn said. “Don’t let people talk you out of it. If you have a strong voice, there’s room for you in the comic world.”

Destrehan residents Larry and Mary St. Germain are in the running to win the SilverSneakers Member of the Year Award – a national award present to SilverSneakers members. […]