When Luz Escobar was a freshman at Destrehan High School, she was trying to find herself while learning how to combat anxiety.

These days, the Class of 2020 graduate can stand as an inspiration for the many others who must overcome that hurdle. Escobar, who once shied away from group activities, emerged as not only one of the most active students on campus, but also one of its strongest leaders.

Escobar has served as student body president, president of Mu Alpha Theta, vice president of the Earth club, secretary of the National English Honor Society and a junior councilor for Swamp School.

She found a turning point during her sophomore year. After cancelling on her freshman plans to try out for the school’s cross-country team, a year later she gave it a shot.

“I was just going through this time where I was battling anxiety for the first time, so I’d decided not to,” Escobar said. “But once I did (the next year), I met my coaches and teammates and things just clicked. I learned so much about myself, about becoming a better leader and finding confidence.”

When her first cross country season ended, she found she had changed for the positive.

She wanted to expand on that feeling, and along with it her newfound confidence and leadership skills. Thus, she began joining as many extracurricular activities as she could, and gravitated toward leadership roles.

“I wanted to make the biggest impact I could,” Escobar said. “You can have a positive impact on people both as a member and in a leadership role, but for me I felt that was the best and most effective way. I wanted to be compassionate and passionate at the same time, willing to hear others’ ideas … I think I can work well with others while also being able to lead.” 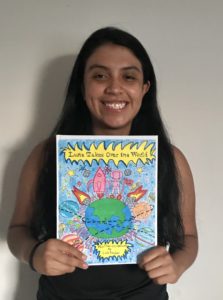 Part of the reason she felt strongly about making a positive impact on her school was she considered her teachers and fellow students family. Escobar has lived in several different places – she came to the U.S. from Nicaragua and spent time in Illinois and Georgia before arriving in St. Charles Parish. Beyond her mother and grandmother who both live here, Destrehan High was where all her closest relationships were fostered.

“I’ve met so many amazing people here,” she said. “Every time I walk through those glass doors, whether I’m going to the classroom or headed to practice, I know I can lean so much on them and learn so much from them. I don’t have a lot of family here, but they’re my family.”

Later this year, she’ll be on the move again. Escobar will be attending the University of Villanova on scholarship, where she plans to study biology or civil engineering as a major. While she hasn’t settled on which path to take, her endgame is to be able to help as many people as possible.

“I know I want to make a positive impact on my community,” she said. “Be it here in Destrehan or Nicaragua … as a civil engineer, someone who creates and improves a water system, or biology, headed down the treatment track and becoming a doctor.”

She also likes to draw and write. For her senior project, she self-published a children’s book. And on the subject of writing, she wrote a bit of advice as part of her Class of 2020 profile, expressing to underclassmen that they not take anything for granted: “Do everything – go to prom, homecoming, football games and pep rallies. Just go, you’ll regret it if you don’t.”

It certainly served her well. And as for making another big move, as she prepares to venture out to Pennsylvania for her time at Villanova, she’s more than ready to take it on.  “I feel like I wasn’t born to stay in just one place,” she said, so it represents an exciting prospect.

Accomplished grad has sights set on college, then medical school

Amna Aslam has her sights set on medical school now that her high school years have come to an end – years that, she said, were filled with wonderful teachers. […]

Luling man with Down syndrome lets nothing stop him