When Connie Love sees her 16-year-old son, now as a Special Olympics athlete, she thinks back to the day he uttered his first word at 4-1/2 years old.

He said, “Ball,” and his family still gets teary-eyed recounting this momentous day and turning point in his life.

“Oh my God, it makes you speechless,” his mother said. “It just opens so many doors. It gives you hope.”

Michael “Mickey” Love of Norco was diagnosed with autism at age 3, but he’s steaming ahead in life.

“We can’t shut him up,” muses his mother. “He talks everyday. He texts me at lunch. He’s a conversationalist. He loves to go and talk to the families at the Special Olympics and interact with the children, and try to get to know them. Michael shares with other people. It’s all because of Special Olympics.”

“Special Olympics is my family, my friends and I love them,” he said. “Being involved with it has given me confidence, taught me kindness and compassion, and has made me the person that I am today.”

Mickey serves as an athlete leader and assists with mentoring other athletes. He believes God has a special calling on his life to help people. He volunteers by delivering food to the homeless in New Orleans, helping at his church, cutting his elderly neighbors’ grass and assists wherever he sees help is needed. He is a member of the school swim team, Air Force Jr. ROTC and the St. Charles 4-H Club.

“He’s a walking calculator,” Connie said. “He just pops it out his head, but 1 + 1 was a struggle. It’s too simple, but the really tough stuff he gets.”

His father, who has done IT work for more than 30 years, taught Mickey and now he’s what Connie calls “a phenomenal genius” fixing people’s computers.”

He also likes to cook and does it competitively with 4-H – and he’s won there, too. He’s also gotten a learner’s permit. 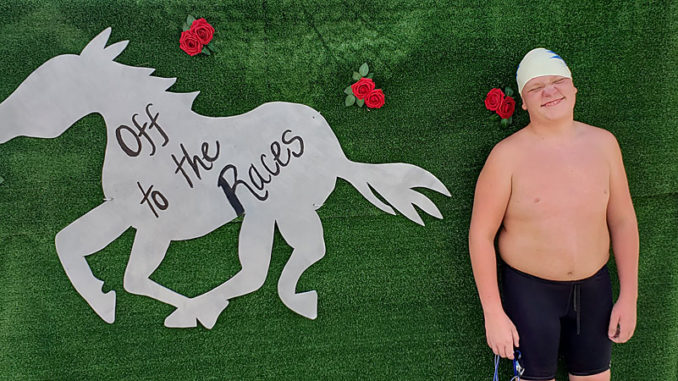 The Destrehan High student’s goals are to continue swimming and to attend the USA Games 2022 in Orlando and attend World Games 2023 in Sweden. Mickey wants to attend college to earn a degree that will allow him to work for the U.S. Military, and to continue to be a part of Special Olympics as a coach, an athlete and a leader for other athletes.

Mickey swims about six hours a day in anticipation of his ambitions.

“Special Olympics is my family, my friends and I love them.” — Michael Love

It’s an amazing turnaround for the child that the Loves knew would have complications at birth.

Connie’s health issues warranted his delivery early, which would likely come with complications so worrisome that the doctor advised abortion was an option. They refused. Mickey was born with Legg-Calve’-Perthes disease, a childhood hip disorder initiated by a disrupted flow of blood to the femur that can eventually kill the bone, and he’ll need surgery.

But she also recalled, “He was always the happiest baby. He was just smiling, giggling … just happy.”

By age 3, he was diagnosed with autism and was nonverbal, his mother said. He didn’t meet milestones for his age – he didn’t respond to activities, didn’t roll over, didn’t respond to reading and certain stimuli, and didn’t walk until he was nearly 2 years old.

“We still loved him and tried to do everything we could to help him,” Connie said. “We have always fully accepted Mickey for who he is and we love him so unconditionally. We support him in everything he wants to do. He’s absolutely a blessing and gift to us as a family.”

Instead, they focused harder on teaching him, and being more patient. He requires repetition in teaching, but Mickey retained what he was taught. They got him into sports on the parish level until he could participate in Special Olympics at age 8.

“We have completely and totally accepted our child and appreciate our child,” Love said. “We just keep an open heart about it. He takes a different path, but he does it. We’ve always taught him there are no limitations to what you can do.”

Who is Michael Love?

She got to school at 6 a.m. and didn’t leave until 7 p.m. Even more remarkable is the fact that, even if the times varied slightly, she attended every day. […]