Catherine Walter was numb when she heard the news.

“I just heard cancer … when she told me, that’s all I heard. I don’t remember anything else she said,” Walter recalled.

Walter was recently diagnosed with breast cancer and is facing a double mastectomy in the coming year. Doctors have found at least nine tumors thus far and have told her the cancer is rapidly growing, necessitating chemotherapy and potential radiation treatment, the former of which she will begin Dec. 29.

Tim Madere of Destrehan, who has worked with Walter in various capacities since 2016, has organized a GoFundMe page (titled Be the Reason for Hope (Beat Cancer Cat) to help the mother of four offset medical expenses – Walter already works two jobs to make ends meet, and these circumstances have thrown her life into upheaval. Madere and a group of supporters are also holding a raffle for a crawfish pirogue and a 55 inch smart TV set, of which he said details will be released soon. 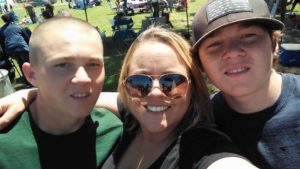 “I heard this and it hurt my heart,” said Madere, whose GoFundMe page has drawn more than $3,000 in donations to help Walter. “We’ve worked together, she’s been my assistant … we still keep in touch nearly every day. She’s very, very good at what she does, I’ve always had so much respect for her. I wanted to do as much as I can for her, and a group of us got together to put together a fundraiser (auction).

Madere said the television and LSU-themed pirogue were donated for the cause.

“I think her seeing the support that’s out there for her is helping … it’s kind of a way for us to say, ‘We’re gonna get you through this,’’’ Madere said.

Walter learned of the diagnosis after scheduling her annual mammogram at a routine doctor’s appointment. About a week and a half after undergoing the screening, she received a call asking if she had gone in to do an ultrasound.

“I was confused and said I hadn’t … they said someone was supposed to call, because the mammogram showed something abnormal,” Walter said. “Radiology called later that day and we scheduled the ultrasound.”

She went in for that, then needed another mammogram, and then another ultrasound. Then she needed further consultation from the radiologist.

“At that point, I knew something was wrong,” said Walter, of Gramercy.

She was told to see a specialist, where she would undergo another mammogram and then a biopsy. Two days later, she received a call and learned cancer was detected.

“There was some talk of chemo, radiation … it was a blur,” Walter said. “She said mastectomy would definitely have to happen because of where the tumors were located, once close to my chest wall, and one further up. They were too far apart.”

Another biopsy showed cancer in her lymph nodes. 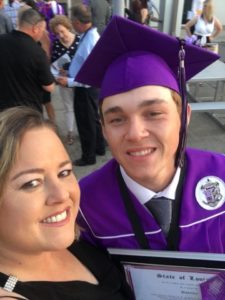 “I started crying, of course,” Walter said. “My mind just basically went blank. All I could think of was my kids. They’re grown now, but still … they’re adults, but young adults … I don’t know all of my family history. I know my aunt’s had cancer, but not beyond that.”

She was given the option of when to begin the 12 rounds of chemotherapy she’s got ahead of her. Walter said she chose the end of December to enjoy the Christmas holiday with her children. The rounds will be once every three weeks.

“I’ve been by myself for so long … I’ve prided myself my whole adult life on being independent,” she said, tearing up. “Thinking I might have to fall back on my parents, or my children, and burden them … that’s the worst part of this.”

She said the rallying of support from Madere and who she called her “work family” has made things more bearable, and she added she’s been touched by each and every gesture.

“There are people who I know only from work, who we don’t hang out outside of that, and they all come together when this happens to offer support. It means so much,” Walter said. “As much as I know everyone is struggling and going through things with COVID, for them to take their money and donate it … they’re amazing for that.”

Two Norco Elementary School third graders have big plans over Mardi Gras break, and it has nothing to do with sleeping in late or vacations. […]

Amidst the COVID-19 pandemic, providers at Access Health Louisiana’s two St. Charles Parish health clinics noticed a troubling trend — there became a large void in being able to obtain the necessary vitals, such as blood pressure readings, of patients who were strictly adhering to stay-at-home orders. […]

by MJ's Boutique - 1 month ago