It’s been an extremely difficult year for Peter Woullard.

But, little by little, things are getting better.

Last spring, Woullard experienced the worst fear of healthcare workers battling on the frontlines of the COVID-19 pandemic: a severe and debilitating case of the virus, which caused him to spend nearly 30 days on a ventilator and the better part of five months receiving care in different medical facilities. Though he lived through the ordeal, he lost function in his extremities and had to relearn several day-to-day tasks – the ability to talk, to eat on his own, and has been in the process of learning to walk again.

Through hours and hours of physical and occupational therapy, he’s made steady improvements. Last week, Woullard was able to stand and take his first steps since he was hospitalized for the virus in March of 2020.

“I’m just trying to get stronger, to get back to where I was before.”

Last year, Woullard and his wife, Patricia were two of the many healthcare workers to face what was an unknown, scary situation on a daily basis – both worked at St. Charles Parish Hospital, Woullard as a behavioral health unit technician and Patricia as an operating room assistant. As such, both were regularly at risk to COVID exposure.

During a shift one afternoon, he fell ill suddenly – and unexpectedly, as Woullard arrived for work that day and recorded a normal temperature upon admission. But about two hours after wrapping up work with a patient, he began shivering. His temperature shot upward, and he was suffering from a high grade fever with a recording of 103.

“I called my wife and let her know I wasn’t feeling well,” Woullard recalled. “I wanted to go straight home. It really caught me by surprise, because I really didn’t realize I was as sick as I was.”

While COVID may have been a thought for him, he said he truly did not believe he had contracted the virus and expected his symptoms to recede. But his test for the virus proved positive, and the situation would only get worse as days went by.

“My kidneys shut down,” Woullard said. “It just took me over, really.”

A little more than a week after his positive test, Woullard was back to the hospital, this time as a patient. His kidney failed and he was placed on dialysis. He went into cardiac arrest, and at one point he coded – the belief was the odds were against him and he might not make it. While he battled through, he went on to suffer a stroke.

He finally turned the corner.

“I was beyond excited that he woke up and spoke to me,” said Alissa Amedee, a nurse at Ochsner Medical Center in Kenner, shortly after he was discharged. “I’ll never forget some of his first words to me … I was telling him I was going to FaceTime his wife later that day so she could finally see him without the breathing tube. It had been about 15 days. He responded, ‘Yeah, it’s been hours.’ I couldn’t help but laugh with him. He didn’t even realize all he had fought through to be there and awake that day.”

Woullard remembers the people who helped guide him back to health, including Amedee, and said the power of prayer is also a reason why he’s here today.

“She prayed with me in the hospital,” Woullard said. “My wife, my family, they prayed that whole time. My Lord and Savior, he’s a giving God, a loving God and by the grace of Him, I’m still here. He was in my heart, in my nurse’s heart, and made sure I was OK. I thank so many people that had a lot to do with my recovery. One thing I know, prayers work and I’m still praying today.” 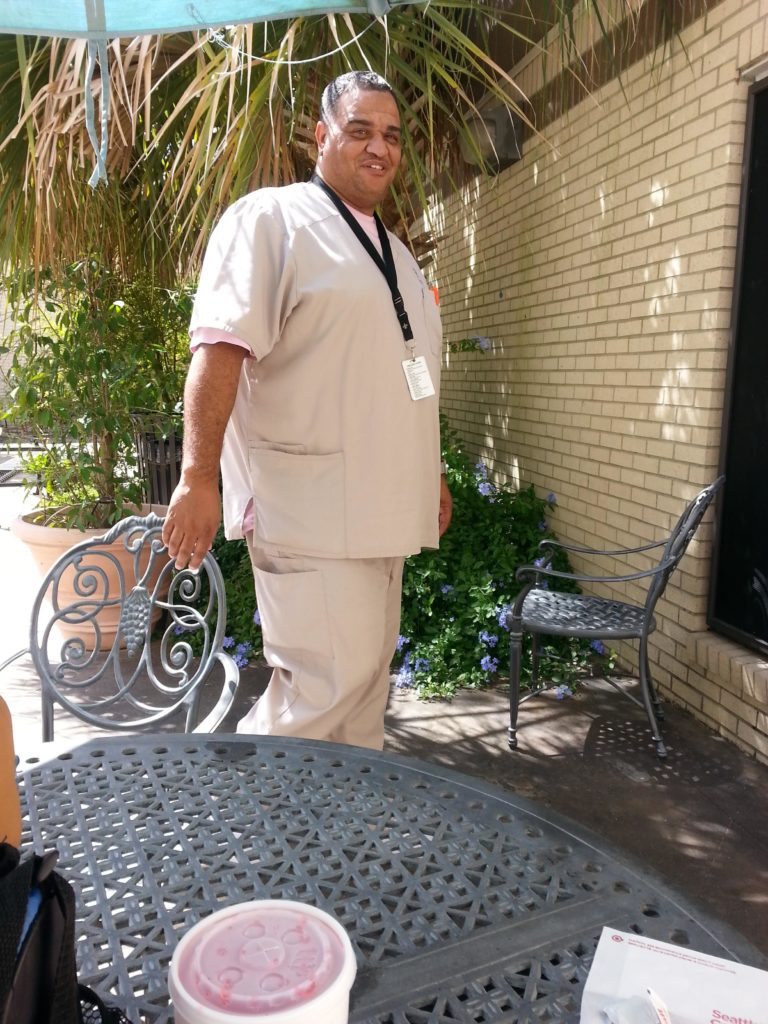 Patricia gave her husband credit for showing such strong will.

“Peter is a fighter.  He is a miracle,” she said. “God did not bring him this far to leave him. Peter has his good days and bad, suffering with fatigue, foot pain, body pain, but he’s still pushing through with God’s help. That coronavirus disease is real. It’s no joke.”

He had, and still has, a long journey to recovery before him, having lost muscle mass and range of function in his arms and legs. He suffered nerve damage in his legs, hands and feet.

“I first started attending therapy in October … I’ve been doing both occupational and physical therapy several times a week,” Woullard said. “I lost a lot from laying up in the hospital for that long. I know it’s going to take some time before I’m able to work again and get back to a normal lifestyle.”

As he works toward his goal of a full recovery, many are still offering that support. More than $2,000 has been donated to a GoFundMe page (titled Help Peter build a walk in shower due to COVID19) set up by the family to make the bathroom in their home more accessible for Woullard while his mobility is limited.

As he took his first steps since his plight began, last week also marked a different milestone for him, as Woullard received his first dose of the COVID-19 vaccine, and he hopes to see many more follow suit.

“Everyone needs to get vaccinated … I’ve walked in those shoes as someone with it,” Woullard said. “They can learn from me … if anyone has any questions about COVID, about what it can do to you, I can tell them all they’d ever need to know … thank God I’m still here.”

A lot has changed in St. Charles Parish over the years, but one thing has stayed remarkably the same – if you want to use an elliptical machine at NDurance Fitness in the early morning hours, you better pick one that isn’t in front of the televisions. […]

Parish President takes to the air at basketball camp

As St. Charles Parish President Matt Jewell fielded questions from young basketball campers at the Edward Dufresne Community Center last week, he was quite ready to answer the most inevitable query. […]