The price of crawfish was as low as it had been in years at this point in the season in 2017, but the frigid temperatures this winter have helped reverse that trend entirely.

The drop in temperature, and at times freezing conditions, have curtailed the supply of crawfish available to suppliers, and that’s affected the price tag for both vendors and the public alike.

“I think it’s been about double what we were paying last year,” said Willie Hebert, owner of Hebert’s Seafood in Boutte. “The price was high to begin with this year, but the supply has dwindled. (The weather) has definitely affected things.”

In late January of last year, live crawfish retailed for approximately $2.50 a pound. This year, that number is up to a price of $4.39 per pound, with boiled crawfish at $5.49.

The supply is low just as the demand is heightening, with Super Bowl Sunday a little more than a week away. That event and holiday gatherings usually trigger a spike in sales.

“Hopefully the weather straightens out and more product is available to us,” Hebert said. “Otherwise, we’ll be in a bind.”

Hebert said with lakes and ponds frozen over, those out to catch crawfish had their hands tied. Even without a hard freeze, he notes, crawfish don’t tend to bite as much when the water temperature drops to a certain degree.

“I think (the price and supply) could bounce back with a good stretch of warm weather,” he added. “That could definitely make a difference.”

Hebert noted last year that the greater early season supply was a big positive when coupled with what he said has been a growing demand for crawfish out of state.

“In Texas and Arkansas, people in those states have become more accustomed to crawfish as we’ve gone on. It’s just like alligator. After Swamp People gained popularity, now you’ve got people all over eating gator meat, where you didn’t see as much of that before.” 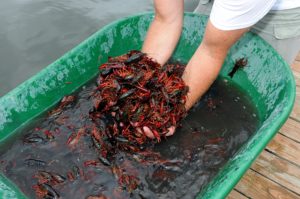 He said he wasn’t sure why the price was higher this year than last prior to the cold spell.

Last summer, there was concern that an outbreak of a deadly disease called White Spot Syndrome Virus could impact the crawfish industry.

Last year, the virus had a greater effect than in years prior. While it only affects crustaceans and cannot harm people who eat crawfish, it triggered a significant drop off in several parishes.

Two games back of the lead in District 7-5A, Destrehan got off the bus at Hahnville Monday knowing that to stay in the mix for a district championship, it would have to deliver a week to remember – starting with a victory over its cross-parish archrival. […]

Last year, Ivory Sims became a published author for the very first time with the printing of her first book. A year later, the sequel has arrived. […]

Adopt a Senior returns for Class of 2021

Throughout the storm that was 2020, there were some shining examples of strong community. The Adopt a Senior cause was one such instance – and as it turns out, it wasn’t a one-and-done practice. This […]