Since his birth last summer, Jonah Landry has been in a non-stop battle for his health, and for his life.

He was diagnosed with Down Syndrome shortly after his July 30 birth, and beyond that doctors discovered a hole in his heart. He is in need of open heart surgery, but that too has been delayed by complications: he contracted Respiratory Syncytial Virus (RSV), Rhinovirus and two other bacterial infections between his diagnosis and initially planned surgery time.

Jonah has been intubated three times and has received nine blood transfusions. He’s spent precious little time outside of hospital walls, beyond being transported to Children’s Hospital in New Orleans for specialized care in December. Nor have his parents, Cory and Jessica Landry, who have spent the vast majority of what’s been nearly six months alongside him. And, if all goes well, his heart surgery date is tentatively scheduled March 25, meaning two more months at minimum.

“It’s been one thing after another, after another,” said Leigh Landry, Jonah’s aunt and of Bayou Gauche. “He’s battling and battling. He can’t breathe on his own. Nobody’s sure of the answers yet. It’s scary … and really heartbreaking.”

Leigh and her husband Dylan, who is Corey Landry’s brother, have set up a GoFundMe (titled Jonah’s Journey) to help offset medical and other costs for Jonah and his parents. Jonah is the third child of Jessica and Corey Landry, with a high school junior and fourth grader, respectively, to care for as well. There is also a dinner fundraiser being held in St. James Parish, where Dylan works.

But life outside of the hospital has come to a halt, with the matter at hand in such focus. With it, other matters fall outside of that focus.

“They’re not working … he’s left the hospital once so far, I think, but otherwise they’ve been there,” Leigh said. “House bills, your normal bills … they go on the backburner and you almost forget at first, because you’re so consumed with making sure your child will make it to next week.”

“We live in St. Charles Parish and a lot of people know the family, so we wanted to do something to help, to give people another way to help beyond the dinner, in case they can’t make the trip or would just like to donate.” 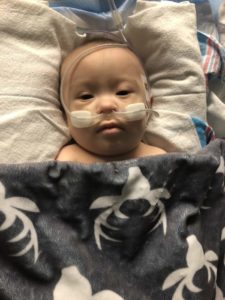 So far, Jonah’s story has captured attention and garnered support. As of Jan. 20, the GoFundMe alone had raised nearly $5,000.

“I didn’t expect that outcome,” Leigh said. “Neither did Jessica, she was blown away and she’s so grateful for everyone’s support.”

Leigh said Corey and Jessica have leaned on their strong faith to keep moving forward each day, and that some days are, of course, harder than others for Jonah’s parents.

“They’re going to be in the hospital for a very long time, two more months, and they have been already. It’s day by day,” Leigh said. “(Jonah’s) immune system is very compromised, because his heart and lungs are working against each other because of the hole in his heart. Every time we’ve gone to visit, when the nurse comes in, Jessica’s up, watching what’s going on, trying to get answers.

“(The Down Syndrome) diagnosis was unexpected, and nothing has let up since that day,” Leigh said. We just wanted to do something to help out, because it’s the right thing to do.”

Beyond the GoFundMe, the fundraiser lunch will be held on Friday, Feb. 7 at NuStar’s St. James Terminal on 7167 Koch Road in Vacherie. Cost will be $10 per plate and lunches will be available for pick up at 10:30 a.m. Jambalaya, white beans, salad, bread and dessert will be included. Those interested may order by contacting joyce.gravois@nustarenergy.com, jay.folse@nustarenergy.com or dylan.landry@nustarenergy.com or by calling (225)-746-2122 by Feb. 5.

For senior students at Destrehan and Hahnville high schools, it seems it will be better late than never. […]

It’s been in the works for months, and now prospective pilots can receive flight instruction right here in the River Parishes. […]