Nearly five months after a tugboat accident that claimed the life of boat captain Shawn Pucheu and two other men in Luling, members of Pucheu’s family gathered near the Luling bridge on Father’s Day to celebrate the life of not only a devoted father to his own children, but a father figure for members of his extended family as well.

“He really was … he was like a father figure to all of us,” said Cody Summers, Pucheu’s nephew who made the hour-long trip from Bay St. Louis, Mississippi. “We all wanted to go there to begin with to have that moment … we thought it would be fitting to go and have a little gathering for Father’s Day.”

Summers said it was an emotional gathering, but one that went well and offered some catharsis as the family shared memories. 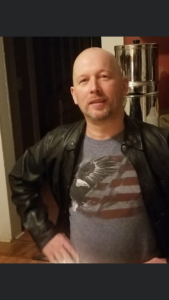 On January 26, two barge towing vessels collided, including the R.C. Creppel, which Pucheu was aboard. A fourth man on the boat was rescued and survived, but the U.S. Coast Guard was ultimately forced to suspend the search for the other three men after a 67-hour search.

Summers said he felt fortunate to have talked to Pucheu one last time, on the night before the accident. That conversation began simply because the former was eating Pucheu’s favorite candy – wild berry Life Savers – and texted him a photo of the snack.

“He gave me a call after and we just kind of talked about trying to get together to hang out when we could,” Summers said. “He was my uncle, but we were buddies. We’d joke around, roast each other. Even though I was a lot younger, we were kind of like brothers.”

But beyond Pucheu’s sense of humor, Summers said his uncle was someone who would “give someone the shirt off his back” if he thought it could help them in a time of need.

“He did it for our family when we were struggling financially,” Summers said. “It’s just the type of guy he was. He’d help anyone.”

Summers said Pucheu was, in many ways, a great role model for him.

“He always wanted what was best for my brother and I,” Summers said. “When I’d get in trouble, he’d call me and try to guide me in the right direction. He helped shape me into who I am today and made a really big impact in my life.”

A surviving passenger on the boat conveyed that in Pucheu’s last moments, he went from the ship’s galley below deck to attempt to wake those on the boat who were sleeping, in order to alert them and give them a chance to get to safety. Pucheu was “off duty” at the time, as he was part of a rotation guiding the ship.

“He was just drinking his coffee, from what we were told, and he heard the sirens that I guess were to warn everyone,” Summers said. “His first instinct was to try and help others. He was playing the hero.”

Making the tragedy more difficult for the family is the fact that the bodies of Pucheu, Matthew Brigalia and Lester Naquin, have not been recovered. The R.C. Creppel sank into the river, and the high level of the Mississippi River water has made a recovery effort nonviable to this point, as it would not be safe enough for a dive team given the environment.

But Pucheu’s family received a call recently indicating the river level could recede enough that a dive mission could be viable early this month.

“It would be heartbreaking, for sure, but it would also mean so much to have that closure,” Summers said. “To have some remains to bury and to be able to have a funeral. It can never be fixed, but it would make everyone feel better to have that bit of closure.”

Destrehan High School has named new head coaches for their boys and girls basketball teams, announcing the appointments of Troy Green Sr. and Jenn Miller to lead those respective programs at Wednesday night’s meeting of the St. Charles Parish School Board. […]

Destrehan man on a mission to stop neighborhood flooding

Walter Pilie, a Destrehan resident of Ormond Plantation Estates for 34 years, has made it his mission to do whatever he can to get his and other neighborhoods in St. Charles Parish to stop flooding. […]