While he is a second generation healthcare professional who has followed in the footsteps of his father, a longtime physician, and mother, who has worked in healthcare all of her life, it was some time before Dr. Jorge Morales knew this was his calling.

“I actually wanted to go against the grain,” said Morales, a hospitalist at St. Charles Parish Hospital. “I studied economics in undergraduate school and worked in marketing for a few years. As serendipitous as life is, I found myself helping my father in his clinic at the time.”

He had the chance to see firsthand the positive impact his father made on the lives of others each day, and it inspired him to pursue a career in medicine. As they say, the rest is history.

“That showed me the field of medicine is more than a job. It’s a calling to help others and to make their lives better. I decided to return to school and a year later, after taking the science classes I had always shied away from and the MCAT, I was accepted into medical school,” Morales said, adding of his parents, “I was blessed with two amazing role models early on.” 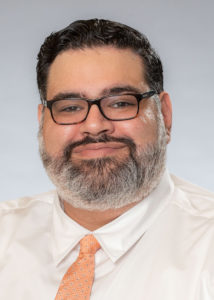 Being part of a family of health care professionals likely had its benefits this year, as COVID-19 struck worldwide. Morales said the onset of the virus in the pandemic’s early months was like nothing he’d experienced before, and the uncertainty surrounding every aspect of it offered little footing for those tasked with restoring patients back to health.

He admitted it was taxing emotionally to see the toll COVID took on those infected.

“Patients were suffering and we knew so little about the virus and the disease course. Like many physicians, I felt uncertainty and fear,” Morales said. “My heart broke when people on ventilators were dying and due to safety protocols, family members couldn’t be at their side. Our hospitals, and particularly our ICUs, were filled to the brim, and as many people as we were able to help, it never felt like enough.”

Now, five months into the pandemic, he says much has changed. While hospitals are beginning to fill again, he said healthcare workers are much more prepared, more educated and are getting better at managing the illness and its effects.

While much focus has been thrust upon COVID statistics, Morales said it’s important to not become desensitized to the impact on someone among the infected, nor their friends and family. Cases can rise and fall, but those battling the illness are not just numbers, he said.

“Each number is a person,” Morales said. “A  mother, a father, a sister or brother with friends and family that care for and love them. These people are real. Don’t let mild inconveniences stand in the way of protecting the people you care about in your communities.”

He echoes the advice of wear a mask, wash your hands and practice social distancing as much as possible in order to get out of the COVID woods, warning we’re not there yet.

The good news is so much more is known now about the disease process, how it spreads and how to manage it that there seems to be light at the end of the tunnel.

Until then, he’ll continue to do his best to not just treat his patients, but to raise their spirits during an unfamiliar and scary time in their lives. Likewise, sometimes it only takes a kind word to raise his own.

“Working in a hospital, you’re often seeing people at their lowest. Being a part of making them better is an amazing feeling,” Morales said. “I love being able to treat different family members within a community. When they tell me they’re happy I’m their doctor because their friend or family had such a good experience here, it makes me feel like we’re doing something right.”

Arrest made in Luling shooting of 19-month-old child

A man was arrested in relation to a shooting in Luling that wounded and hospitalized his 19-month-old nephew. […]

It’s been an extremely difficult year for Peter Woullard.

But, little by little, things are getting better. […]

by Gulf Engine & Equipment - 6 months ago