Lloyd John Joshua Jefferson IV recently graduated from Destrehan High School, and he has his sights set on the Christian music business.

Jefferson, a nominee for Student of the Year, spent his time at DHS participating in the Next Gen Club, swimming on the swim team and excelling in his honors and college credit courses.

An active member of Celebration Church in Metairie, Jefferson said he discovered his passion for music in 10th grade.

“In the middle of sophomore year I started making beats on my Mac,” he said. “I’d been listening to Christian rap for a while, and then I started writing lyrics.” 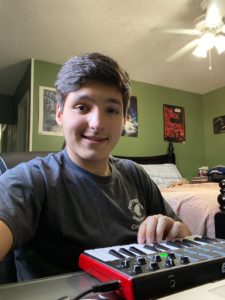 it was a talent that came easily.

“I didn’t really learn how to rap,” he said. “I truly believe I have a gift, because like I said, I have no music background.”

He has since performed at Celebration Church, and said he hopes to start performing at more venues.

“I just started writing lyrics to my beats and I didn’t think much of it,” he said. “Many people complemented me about my lyrics and told me that they believe I have a gift as well.”

Jefferson was able to showcase that gift for his senior project.

“My senior project presentation was in front of some school board members,” he said. “I got dressed up and there were four people grading the two songs I had recorded … they appreciated that there was good rap out there.”

Jefferson’s music is available on YouTube – search for LJ4 – as well as Apple Music and Spotify.

“If you can make the music, then getting it out there is pretty easy,” he said of getting his music onto the various streaming services.

Jefferson hopes to parlay his passion for music into a career.

“I love being able to make music that really helps people and writing lyrics that can change people’s lives,” he said.

In the fall and with the aid of scholarships, Jefferson will head to Loyola University, where he will major in Music Industry Studies.

“I’m pretty excited … just to be more free and learn more about music for sure,” he said.

Whatever the future brings, Jefferson said he hopes music is a part of it.

“My biggest hope is that I am successful, and I am able to change lives at the same time,” he said. “I aspire to be able to perform in front of thousands one day, and I want to have thousands of daily listeners and eventually millions … I know I can do it.”

For Karley Voges, dancing is not just a passion, but a way of life. […]

Friends Judy Ebeling, Joy Robert and Wilma Matherne love to sew, and they love to sew together. So when they can sew together and benefit a great cause – they said there’s nothing better. […]

2020 has been vastly different than anyone expected. The COVID-19 pandemic has changed our lives in countless ways, from the way we work to the way we go to school. […]

About Monique Roth 111 Articles
Roth has both her undergraduate and graduate degree in journalism, which she has utilized in the past as an instructor at Southeastern Louisiana University and a reporter at various newspapers and online publications. She grew up in LaPlace, where she currently resides with her husband and three daughters.
Website