Grew up watching the show with siblings, got to compete alongside them

Destrehan’s Karen Vicknair Richoux fondly recalled waking up on Sunday mornings as she grew up, playing cards with her dad and her siblings, watching the Saints play football and also indulging in one of her family’s not-so-guilty pleasures: watching a few rounds of Family Feud.

“We love games,” Richoux said. “That’s just how we’ve always been in our family. We still watch it today.”

They’ve had a bit more reason to recently, and that goes for their extended family and friends as well. Richoux and her two sisters are no longer just fans of the show: they’re contestants, along with two of Richoux’s nieces.

The five women appeared on several episodes of Family Feud over the past two weeks. Along with Richoux were her sisters Angela Melancon Solomon and Cindy DeLacerda, while two of Angela’s daughters, Anne Stubbs and Abby Link, joined them. Stubbs and Link share that love of game shows passed down from their mother, so they were natural choices, said Richoux.

“Growing up, we’d all talk about how we wanted to go on Family Feud,” Richoux said. “It’s something we enjoyed together. And, I mean, it’s something you’ve always wanted, but never, ever knew you’d get it. When it came true … we’re still like, ‘Did it really happen?’”

Incidentally, Family Feud was not the original target for Richoux. This all started when she learned that Wheel of Fortune would be holding auditions in New Orleans. She brought Angela along with her and the two auditioned, but this time didn’t get a call back.

Well, at least not a call from the Wheel crew.

“Cindy called and says, ‘I told y’all I wanted to go on Family Feud! So why can’t we do that?’” Richoux said. “I looked into it and it happened to be in Alabama. And for most of us, we’re kind of spread out living in different areas now, and that actually turned out to be kind of a central location for us to meet.”

Thousands auditioned. The Vicknairs were among those chosen to travel to Los Angeles and have a second audition. It went well: Richoux received a postcard on Oct. 12 of 2018. Just over a year later, on Oct. 16 of this year, their Feud debut landed on the air. 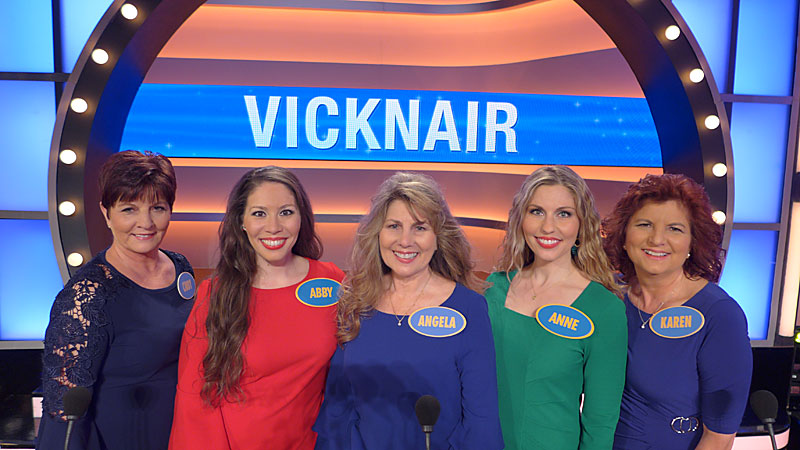 They prepared by watching YouTube videos of prior shows and setting up their best “lineup” to take on the show’s famous tasks, based on the skillset of each woman.

“So, Abby’s the youngest, she’s quick on the draw … she needs to be in that fourth spot,” Richoux said with a laugh.

Their preparation was well worth it, seemingly. The family hit their first day of live competition and made it count, winning the game and earning $20,000 along with it.

“As much as you want the show to be entertaining, you also want to win. We played two games our first day there, winning big on the second game but falling short on Fast Money,” Richoux said. “The adrenaline is pumping so on commercial breaks they bring you a little cup of water to help wet your whistle and the producers come and give you a pep talk to try and calm your nerves.”

She called Steve Harvey quick witted and personable, and noted he and the show’s cast and crew made the Vicknairs feel like family.

“(Harvey) has a comeback to everything you say in the game,” Richoux said. “The cast and crew are terrific. They had some fun with us. They told Abby she’d be the only Catfish Queen ever to appear on the show.”

The tapings happened back in April, and following that was the anticipation of the shows airing, which built to an apex in October.

“We had butterflies that Wednesday it aired. We didn’t remember the questions or answers we gave,” Richoux said.

“We had so much fun. We had a blast. We never thought it would happen … well, it did. It was a dream come true.” — Karen Vicknair Richoux

One of the best parts has been sharing the experience with family and friends, who often seem almost as excited as the five contestants.

“Our Facebook and texts are blowing up, congratulating us,” Richoux said. “Some of them are so, so happy, like they’re up there with us. Everyone knows everyone here in South Louisiana, and it’s really been great.”

One other aspect of it all she’s proud of: her father passed away 30 years ago, so for the sisters, it was something of a means to honor the man they shared so many Family Feud viewings with.

“We had so much fun. We had a blast. We never thought it would happen … well, it did. It was a dream come true.”

Many avid golfers go their entire lives without ever sinking a hole in one.

Barbara Simpson Bergeron, 73, a native of Huntingdon, Pennsylvania and resident of Paradis, Louisiana, passed away on Saturday, June 27, 2020. Barbara is survived by her husband of 47 years, Freddie Bergeron; children, Vickie Maloney, […]

How to navigate hard decisions, the important of honoring commitments and why you shouldn’t give up when something gets hard – these are the life lessons Zephan Cohen said he will take away from his time at Destrehan High School. […]