Destrehan TV evangelist Jesse Duplantis announced to his congregation in his weekly show that God told him his next jet will be an estimated $54 million Dassault Falcon 7X.

Duplantis is asking his followers to foot the tab, just as they did his two previous jets and the one he flies now.

“I’ve owned three different jets in my life and used them and burned them up for the Lord Jesus Christ,” he said. “Now, some people believe that a preacher shouldn’t have jets. I really believe that preachers oughta go on every available voice … every outlet to get this gospel preached to the world.”

In the May 21 video edition of “This Week with Jesse,” the preacher pointed to four photographs of jets on the wall in the ministries’ estimated $3 million, nearly 35,000 square-foot residence in Destrehan, considered the largest single-family residence on the East Bank.

The plantation-style structure is at the corner of Ormond Boulevard and River Road.

In the video, Duplantis described his first two jets and then a third jet, which he said he’s been using for the last 12 years.

When he pointed to the fourth photograph on the wall, he referred to the craft in it as the “Star Trek Enterprise” and, added, “We believe in God for a brand new Falcon 7X so we can go anywhere in the world one stop.”

“It was one of the greatest things he ever told me. I really believe if Jesus was physically on earth today he wouldn’t be riding a donkey.” – Jesse Duplantis

All three private jets were paid for in cash, the prosperity televangelist said, and the new one will be paid for that way, too. Later, Duplantis clarified the planes, as well as a fuel farm, belong to the ministry.

The evangelist said people have asked him why he can’t continue using his current jet, but he explained, “Yes, but I can’t go in one stop. And you see if I could do it with one stop I can fly it a lot cheaper because I have my own fuel farm for it. This one here, I have to stop and pay those exorbitant prices for jet fuel all over the world.”

He further clarified his two former jets (a Citation 500 and Westwing 2) are still in use by other ministries.

Duplantis said God spoke to him about the new jet, maintaining he was told, “Jesse, you want to come up where I’m at?” and also told him it should be a Falcon 7X. 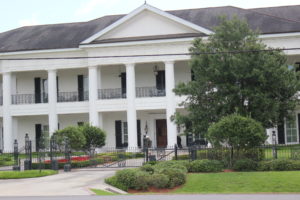 When he asked God how they would pay for it, he said God replied, “Jesse, I didn’t ask you to pay for it. I asked you to believe for it.”

The luxury craft with a $54 million price tag has three engines, can travel nearly 6,000 nautical miles in a trip and seats up to 16 people.

Duplantis further stated in the video that he was excited about the U.S. Embassy being in the nation of Israel, which signals the “end times” that requires him to go out to preach the Bible. This, he added, he must do by airplane and particularly with Jesse Duplantis Ministries being global.

“All this is going to do is touch people to preach the Bible,” he added.

In recent years, the 40-year-old Duplantis Ministries has been investigated by Trinity Foundation, a religious watchdog organization, that had monitored the group for more than 10 years. It alleged the tax-exempt ministry’s Destrehan location, which includes a fun room and theater, represented excessive compensation and lifestyle, and was actually intended for Duplantis’ private use.

Free school meals program moves past obstacles, resumes for once a week pickup

After navigating the turbulent, uncertain waters wrought by the COVID 19 pandemic, the St. Charles Parish public school district will be able to continue supplying free meals for its students following a pair of interruptions. […]

With schools closed, social activities cancelled and social distancing highly recommended in light of the coronavirus pandemic, families across the country are currently tasked with not only educating their children at home, but also entertaining their children from home. […]

Over 100 pounds lost but even more gained

DESTREHAN – When Christina Landry started her fitness journey over two years ago, she could barely walk a block. Just a few weeks ago, she ran across the finish line of her first half marathon. […]