A middle schooler, then high school and now college student, from Destrehan to Hammond, Amber Dillenkoffer has experienced change over the past seven years. But there’s one constant in her life that she’s most proud of – she couldn’t imagine Christmas without it.

This year, the Destrehan High alum and current Southeastern student held her seventh annual Christmas toy drive and giveaway, collecting 420 toys and giving them away as Christmas gifts for children, making the holidays that much happier for each recipient. “Amber’s Reason for the Season Toy Drive” has become an annual highlight for the 18-year-old.

Dillenkoffer sets a goal to top herself in terms of toys collected each year. For the first time, that didn’t happen in 2021, but there’s a good reason behind that – last year’s collection brought a massive spike of donations – nearly 1,400 toys, in fact – which Dillenkoffer partially attributes to more people giving due to the hard times collectively experienced due to the COVID-19 situation. But 2021 does top the previous high mark she set in 2019, which bested 2018, which topped 2017 – and so on.

“I started a Facebook page, and the more people I meet and the more people who go to the page, the more who spread it around. Word gets around, and St. Charles Parish just has a way of coming together,” said Dillenkoffer. “It’s such a fulfilling experience to watch the kids get their toys, to see how excited they are.”

This has become a passion of hers, all starting with a pageant she entered at the age of 12. The event involved donating toys, which sounded fun to her.

It was the continuation of a discovery she’d found about herself as she became more and more involved with volunteering with her church – service truly agreed with her, and helping others made her feel good.

“It became a really big part of my life, really quick,” Dillenkoffer said.

The next year, there was no pageant, but she still wanted to do the toy collection.

“I took it seriously,” she said. “It wasn’t just a contest … I was really passionate about it.” 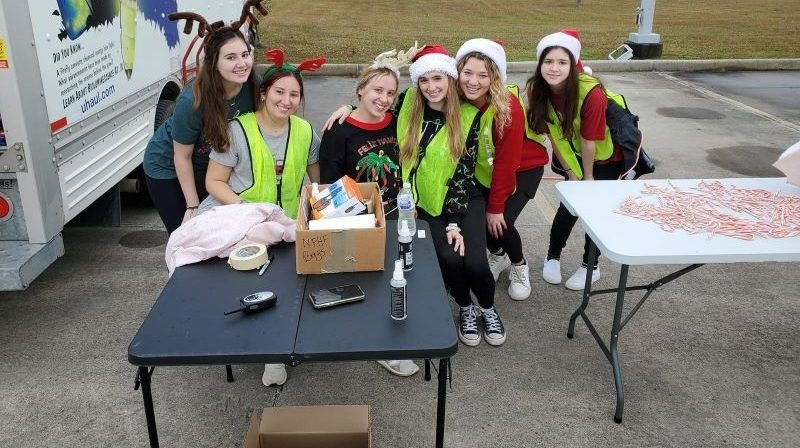 “I feel blessed to be the person who can do this to serve her community, and it’s been so amazing every year,” Dillenkoffer said. “I’m so thankful I get to do this. And my community never ceases to amaze me in how willing they are to help.”

As she attends SLU and lives in Hammond, it was a new situation to adapt to in order to make this year’s event happen. That said, she’s always had to execute a juggling act of sorts to include the drive between her studies, after-school activities and jobs. This was simply a new setting and she would have to clear a few new hurdles, including collecting toys from back home in St. Charles Parish while currently living in Hammond.

“Where I am now, I don’t know as many people or know the area as well … it took me awhile to figure everything out,” she said.

She notes the ball got rolling a little later than usual this year – and at one point she feared she’d fall short of her collection goal – but Amber’s giveaway wouldn’t be denied.

“I want to do this as long as I possibly can,” Dillenkoffer said. “It fills my heart every single year.”

The atmosphere at Wildcat Stadium Tuesday night exceeded what one usually finds during spring game fare: two of the state’s most talented – and dominant – football teams went out to test one another as Destrehan hosted Karr for scrimmage action. […]

In its first meeting of the month, the St. Charles Parish Council unanimously voted to extend an emergency ordinance that was adopted in September that allows the Department of Planning and Zoning to waive local permit fees and various plan review and inspection fees for repairs and renovations required from damage sustained during Hurricane Ida. […]

Sheriff’s Office reminds to buckle up, ‘Click it or Ticket’

The St. Charles Parish Sheriff’s Office is reminding parish residents to buckle their safety belts as the “Click it or Ticket” campaign takes off full force beginning May 23. […]