The atmosphere at Wildcat Stadium Tuesday night exceeded what one usually finds during spring game fare: two of the state’s most talented – and dominant – football teams went out to test one another as Destrehan hosted Karr for scrimmage action.

There was a big crowd in attendance to see it, and the sidelines popped with the colors of several major collegiate football programs, as numerous coaches and scouts were out to see the teams in action. Both Destrehan and Karr boast several strong recruits – both under and upperclassmen.

“It was just a great atmosphere,” said Destrehan quarterback Jai Eugene, among the most sought-after players at the next level. “We were ready to play, and knowing Karr was gonna come out and play hard too … people want to see good guys go at it. That’s all it was.”

The Wildcats have been to one state final and two state semifinals over the past three years of Eugene and this senior class. Karr, meanwhile, has been to a whopping five straight state championship games in Class 4A and won four championships over that span. The Cougars are making the move up to Class 5A this season, and it doesn’t take a wild imagination to envision another meeting between these two teams before 2022 is done.

“They’re moving to Class 5A … they’re always in the semifinals or the championship game, and it’s great for us to get to play that kind of team right now,” Eugene said. “We prepared for it like we would a semifinal kind of game.”

Both teams posted a touchdown early during the situational play portion of the scrimmage. Destrehan struck first when Eugene connected with running back Trey Nixon on a screen pass for a 21-yard touchdown. Nixon set his team up in scoring range earlier in the drive with an explosive run of more than 30 yards.

Karr passer A.J. Samuel answered after leading his team on a 70-yard drive, one capped off by his 3-yard plunge into the endzone.

The defenses took this personally. The remainder of that portion of scrimmage was largely controlled by each side’s stop unit.

“We’ve got a whole new front,” said DHS defensive end/linebacker Kolaj Cobbins, who has garnered major Division I attention even before the start of his upcoming junior year. “All of the seniors that left from the previous year on the line … with that in mind, we had to step up. And our defensive backs, those guys are leaders out here. They keep the flow going. But we definitely still have more to work on for sure.”

Destrehan nearly punched in another score after a 22-yard run by Eugene set the Wildcats up inside the 10, but Karr soon forced a fumble near the goalline to stop the threat. 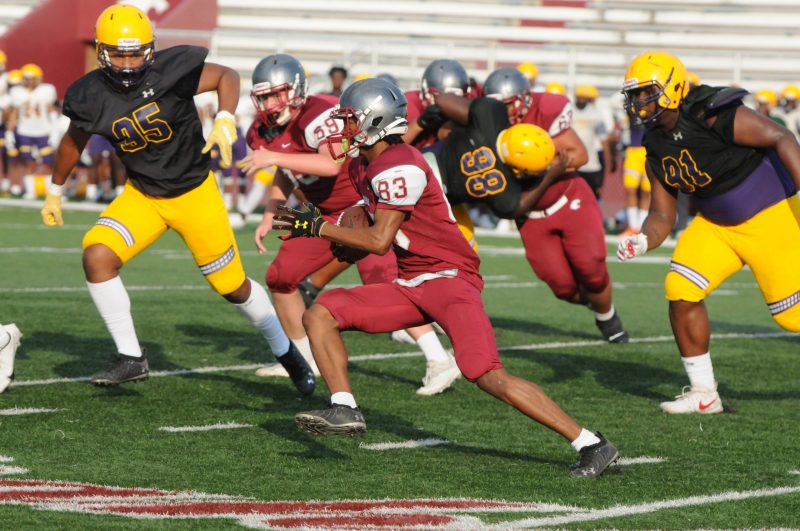 Prior to that, DHS wide receiver Makylon Smothers began turning heads with one of a few splash plays on the night – a 30-plus yard reception from Eugene saw Smothers leap up and extend for the ball and hold on through contact.

“He’s a sophomore, and he’s a backup right now – Leslie Jefferson was out for us,” said Destrehan head coach Marcus Scott. “But he’s a guy with unlimited potential.”

A promising Karr drive was denied points, in part, due to a big pass breakup by DHS defensive back Anthony Robinson.

Destrehan found paydirt later with the second teams on the field, with Christian Nunnery connecting with receiver Du’Quan Dabney, who shook loose downfield for a touchdown.

In the redzone portion of the scrimmage, Eugene connected with Smothers for a 13-yard touchdown that went as the only points either side would post in that drill.

That was, in part, due to a clutch goalline stop by Destrehan that saw the Wildcats force a turnover on downs at the 1. Shane Lee provided a big part of that effort when he made a key stop just before the goal line on third down.

Destrehan’s starting running back, Lee got significant reps on defense in this game, and showed he could make an impact. It’s a luxury the Wildcats can afford, Scott said, because of the team’s wealth of talent at running back.

He also noted that Lee – a multi-sport star who already has two years of significant action under his belt entering his junior season this fall – once again has proven a quick study.

“He’s a difference-maker,” Scott said. “He practiced on defense one day. He went through some walk throughs, but as for actual reps, not many. It’s just the kind of athlete he is.”

The two teams played to a scoreless tie in the 15 -minute timed quarter portion.

LSU, Tulane, Nicholls, UL-Monroe, Grambling, Alabama, Texas and Southern Mississippi were just a few of the schools with presence on the sidelines for this one.

“That’s great … we want to be able to showcase our kids in front of the nation’s best,” Scott said. “And as you can see by the turnout, they’re all out here. We had to have anywhere between 30 and 50 coaches here from all levels.”

Cobbins said it made for an exciting day, but when it came to executing on the field, that had to be pushed to the side.

“The most important thing is to just keep cool and act like nobody is out there,” Cobbins said. “We’re playing a top program in the state in Karr. We played them and we put up a great fight.”

Hahnville High representatives confirmed Friday that Jared Vial has been named the new head coach of the Hahnville baseball team.   […]