When Sarah James first arrived at Destrehan High School, she set a number of goals for herself — chief among them to be one of the top students in her class.

You might say she succeeded. James is the DHS Class of 2018’s salutatorian, that coming on the heels of James earning the honor of High School Student of the Year for St. Charles Parish in her senior year.

James, who gave a speech at last week’s DHS graduation, said the fact her days as a student in the school are now over hasn’t quite sunk in yet, but that she’s proud to see her hard work recognized and will always cherish her time at the school.

“I think it will finally hit me in July when everyone gets their schedules and I won’t have one,” James said. “But it’s nice to know all my hard work over the past four years has paid off.”

James said in addition to pushing herself to earn a top academic finish, she was also very shy as a middle school student and made a concerted effort to get out of her comfort zone, take part in extracurricular activities and truly make her mark at the school. She did that through and through—James was the president of the school’s National Honor Society, was part of Student Council and served as her class’ Vice President as a sophomore and junior. She was also a member of Destrehan’s tennis team and was named captain as a senior.

Through it all, she made her classwork a high priority, noting time management and developing a set routine among keys to her success. 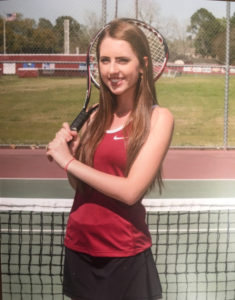 “After my first two years, I definitely established a habit of coming home and just doing my homework right then and there,” James said. “If I don’t procrastinate, it’s much easier to do and it seems less like a burden.”

She said scheduling a study hall as a senior also relieved a lot of pressure.

“It was like learning magic,” James quipped. “Having an extra period in school to get ahead on my work was very, very helpful.”

But just as important as studying, she said, was finding the time to relax, socialize and take part in activities she enjoys, like tennis and painting. Finding balance made success come more naturally, she found.

“I wasn’t as stressed out as I was early on,” James said. “In my junior and senior years, I put more of an emphasis on doing fun things and it had a really positive effect.”

She also credited her teachers at Destrehan for helping her reach her goals, noting she could not have done it without them.

She will go on to LSU where she plans to study biochemical engineering on a pre-med track. She thought about pursuing a degree in law, but said attending a program at Tulane set her on a different path and got her thinking about becoming a doctor.

“My goal is to improve people’s lives, hopefully in a really impactful way” – Sarah James

“The more I thought about it, I knew I wanted to go into medicine,” James said.

She said her ultimate career path is not yet set in stone; she’s fascinated by the prospect of researching information in pursuit of a major breakthrough, such as helping to find a cure for a major illness. But she also loves the idea of working one-on-one to treat patients on an individual level.

“My goal is to improve people’s lives, hopefully in a really impactful way,” James said.

James also regularly volunteers with the Matthew 25:35 food pantry in Destrehan. And last summer, she was involved in a mission trip to Mexico in which she worked with a construction team to help build houses for the underprivileged.

She will be returning there at the end of the month to assist with medical care. James has recruited a few of her friends to join her and her family, and she’s excited to lend a helping hand.

“Three of us are pre-med and will be with the medical team, so we’re very excited,” James said. “You hear about how bad some people have it in the world, and you don’t really realize it until you see it. It’s very eye-opening, and to know you’ve made a positive difference in someone’s life by helping to build a house, or a school, is very rewarding.”

While 2020 has not been particularly gracious to local business and homeowners, St. Charles Parish Assessor Tab Troxler has some good news – help is on the way. […]

Over 400 bookbags filled with school supplies will be ready to be handed out Sunday when Keltric and Sarah Lockett host their seventh annual Back to School Give-a-way. […]