A Des Allemands woman arrested in February on allegations she forged numerous prescriptions under a local pediatrician’s medical license was rearrested last week and faces more than 280 felony counts of identity theft and possession with intent to distribute. 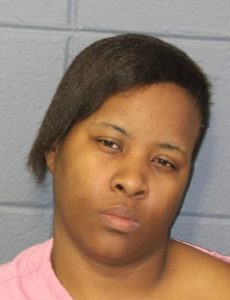 Shallon Dunmiles, 34, of 16616 Hwy. 90, was arrested July 9 on 148 counts of felony identity theft and 136 felony counts of attempting or conspiring to distribute a controlled dangerous substance.

Dunmiles was initially arrested in February after detectives searched her home and recovered a stolen prescription pad among other items of evidence. According to the St. John Parish Sheriff’s Office, she allegedly used the identities of children and other case suspects to forge the fraudulent prescriptions, which were for several medications like Vyvanse, Adderall and Lorazepam. She allegedly began writing the fraudulent prescriptions approximately a year ago.

She worked for a private doctor at the Pediatrics Medical Clinic in LaPlace, according to St. John Parish Sheriff’s Office spokeswoman Angel Thompson. Thompson added it is not known how long she worked for the clinic. Police believe she stole the prescription pad from her employer.

The initial charge against Dunmiles was for a count of attempting or conspiring to distribute or possession with intent to distribute a controlled dangerous substance. Further investigation yielded a plethora of additional charges.

Eight others were arrested, including Danyelle Tuco, 31, of LaPlace, Ebony Stewart, 32, of Opelousas, Andrea Stalks, 42, of LaPlace, Danielle Anderson, 35, of Reserve, Wilfred Perrilloux, 42, of Reserve and Cortez Williams, 22, of Reserve. More arrests are expected.

Detectives were able to arrest Williams and Perrilloux through surveillance conducted, according to the St. John Sheriff’s Office, which revealed they illegally obtained Promethazine with Codine.

Other suspects were arrested following the search of Dunmiles’ residence and as the investigation continued.

On May 5, 2022, Henry “Pete” Joseph LaBranche, Jr. died peacefully at the home of life-long friend LT “PeeWee” Scioneaux, Jr. in Reserve. He was 78. Pete is survived by his sister Sherry Calcagno (Joe), […]