Now, DesForges is embroiled in her own fight – once again.

The 47-year-old was recently diagnosed as having a metastatic cancerous tumor in her pelvis and two lymph nodes. Her situation is consistent with her previous battle against colon cancer, which she defeated six years ago.

She and her husband have raised a son and daughter, 22-year-old Patrick and 12-year-old Sop

hie, and the family is all too familiar with this fight – as is DesForges’ sister, Jennifer Luquette, who is raising money to help DesForges, who already was working toward paying off medical costs from her previous battle with cancer. 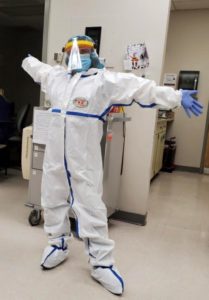 “She’s such a strong person,” said Luquette. “She can’t stand to be down … she wants to function normally. “The heartbreaking part, it ends up being cancer again, and she has to go by herself to find out. We’re in the parking lot, Facebooking … and it’s cancer. All of it, happening again.”

DesForges works as a registered nurse on the Cardiac Unit at her hospital, and has for the past 11 years. She regularly takes on extra shifts to help pay off her 2014 medical expenses, to help put her daughter through school and to provide for her family.

But in March, while working in the COVID ward, she began to feel sharp pain in the same location as her previous cancer, and immediately sought medical attention. The news she received was exactly as

feared, and she would have to go back on chemotherapy. A CAT scan exposed a golf ball-sized tumor in her pelvis, two lymph nodes, and a biopsy exposed metastatic poorly differented adenocarcinoma.

DesForges has undergone surgery to remove the pelvic tumor and involved lymph nodes, and it was a successful procedure. She is getting stronger and has returned to work, but is still not out of the woods. She will have to return to the doctor for evaluation in December to see if any more chemotherapy or additional treatments are necessary, and to see if the cancer has been held at bay for good.

Luquette said when DesForges was diagnosed the first time, just after Mother’s Day 2014, it was initially diverticulitis that required surgery. She was in and out of the emergency room throughout that summer and the family feared she might not make it – her pain was excruciating and constant, and at one point she developed several blood clots and became septic following abdominal drains.

But once she finally was able to have surgery – she needed to be able to stay out of the hospital for six consecutive weeks for the surgery to be deemed safe enough – it was discovered DesForges was suffering from Stage III colon cancer. She underwent chemotherapy for six months – each session with a family member by her side – and even as she went through it, she continued to work her shifts at work to help her patients.

The costs are expected to be higher this time, which is why Luquette began a GoFundMe to help her sister (titled COVID-19 RN needs your help in colon cancer battle). It has thus far raised nearly $6,000. 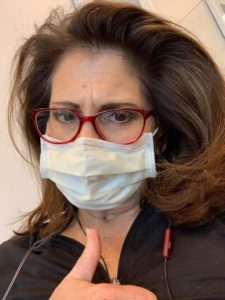 “With this chemo, they throw everything at you so it doesn’t come back,” Luquette said. “She was supposed to have chemotherapy until the end of November, but she’s been responding so well that for now, her last chemo treatment is

her last. In December, she’s going to have another scan to reevaluate and ensure nothing comes back.”

DesForges utilized all of her sick and vacation leave, and returned to work a little more than a month ago. She is no longer in the COVID unit, as her health situation leaves her more vulnerable.

“She’s a fighter,” Luquette said. “She’s that person who helps everyone. She’s so caring and she

doesn’t like to ask for help at all. So it’s difficult for her. For her, she’s raising kids, she has all of the same bills we all have, then all of this on top of what she’s dealing with in her health. She still wants to help everyone.”

While the battle has taken its toll, understandably, on DesForges’ energy level, Luquette said she sees signs each day that DesForges is getting back to herself.

“It’s been different with her being sick, but she’s starting to get back to her old self where she’s really happy,” Luquette said. “It’s such a struggle for her. But she never gives up.”

Luquette, DesForges and their family moved to Luling when the sisters were growing up, Luquette in the fifth grade the year they planted roots in St. Charles Parish.

“It was heartbreaking to hear the news. I just thought, ‘I can’t believe this is coming back and it’s her, again.’ Sometimes I feel like, how much can she take? But prayers and God helped us through the first time. It’s unfair, devastating … but I know if anybody can fight and get through it again, it’s Stephanie.”