“We’re really humbled at the support given us,” Dias said. “And we hope, as a nonprofit, that the community really sees the value in us taking this big step to help everybody in return.”

The $3 million project includes the $2 million purchase of a strip mall in Boutte and $1 million for renovations, a cost that Dias said will be spread out over the term of the mortgage. Half of the 30,000-square-foot mall, which was space formerly occupied by the Boutte Bingo Hall, will be dedicated to the college. The neighboring business tenants will remain.

After operating the bingo hall for 31-1/2 years, owner John Landry said it’s bittersweet for he and his wife, Juanita, to leave the business and area. They have returned to his wife’s hometown of River Ridge.

“The people have been so great in supporting our business,” Landry said. “But we were ready to move on to something different.”

Murray Architects is designing the project at no cost to the United Way of St. Charles.

The bingo hall will be renovated into the River Parish Community College and should be open by fall of next year. The college will be a part of the Louisiana Technical College System and open to all students. 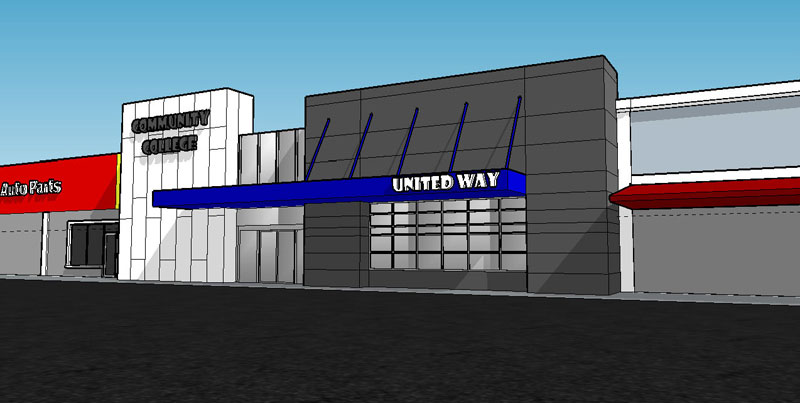 After assessing 16 sites, Dias said the Boutte location stood out by being on a major thoroughfare (Highway 90), while offering high visibility from the highway and ample parking. The location also includes tenants to defray the project cost and is a mile from I-310 for easy access to college traffic.

“We started thinking initially about the underemployed person and providing for their families, but this great thing allows us to help the middle-class person who works in industry and their child at college age,” Dias said. “I think that in years to come there will be individuals and families whose entire lives have been shaped by the fact that they were able to get an education that got them a job that allowed them to support their families.”

Giving back was a strong theme in UW’s efforts with this project.  While other United Ways in the nation have shown little to no growth, the United Way of St. Charles has grown by 60 percent, which Dias described as phenomenal.

Nearly four years ago, Dias said UW’s Million Dollar Idea Committee was created and led by Dow’s Brian Eiler. The committee was charged with answering one question: “If the UW invested $1 million, what would it do?”

The committee’s response was an idea with education weighted toward employment, and the community college is a perfect fit.

“We don’t spend a lot of time looking at what other United Ways do,” Dias said. “We ask our community what it needs.”