Alton Wahl was headed south on the Hale Boggs Memorial Bridge when he saw something tumbling from under two vehicles in the left lane.

“I realized it’s a kitten,” said Wahl. “It just kind of scampered off to the side. Your brain just can’t comprehend you’re seeing something like that, and I’m trying to see where it went. By then, I’m too far from it.”

But Wahl, who describes himself as “a lover of every animal,” wasn’t about to leave a kitten stranded, especially on a towering bridge like this one and with vehicles going 70 mph. He drove down the bridge and called 9-1-1, but still turned around, crossed the bridge again and returned to where he’d seen the feline.

“When I got to the top and got on the shoulder, expecting to find a dead cat, I saw it was cowered against a rail,” he said. “It was just trying to get as close as it could to the rail. I got out of my car and kind of sneaked around it. If it saw me, it would run and there was a drain hole, but I got around it.”

Wahl was on top of the Luling bridge, but he was so concerned about the cat he didn’t think about being  158 feet high.

“It petrified this poor cat,” he said. “I was able to grab it. It was squirming, but I was able to get it into my car. I sat there a minute to catch my breath. A deputy pulled up behind me at that point. I told him I have the kitten and just to meet me at the bottom.” 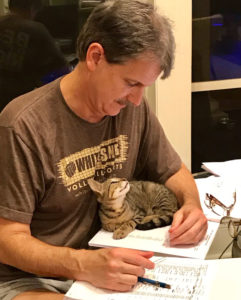 Although the deputy offered to bring the kitten to the St. Charles Parish Animal Shelter in Luling, Wahl volunteered for the job.

Amazingly, the tiger cat had only a brush burn to the top of its head and on the mouth.

When Wahl delivered him, though, he did have a plan. He wanted to be sure the cat was okay and to relay the message that if no one adopted him he would take him.

Shelter Supervisor Jena Troxler said the cat came to the shelter on June 24, but stayed there three weeks to ensure he was healthy for adoption. He was treated for internal parasites, vaccinated and examined – all for an $80 fee.

The kitten was named Bridges at the shelter.

“Often they get into engines, even in summer, and fall out on a drive, but this one sounds like he saw something,” Troxler said.

By July 17, Wahl and his wife, Mary, who live in Metairie, adopted Bridges, whose going to get a new name – Tiki. He has joined their five other cats and, ironically, one of them is a 20-year-old cat named Lucky who also was tossed out of a moving vehicle in a bag on Earhart Expressway.

“When I got to the top and got on the shoulder, expecting to find a dead cat, I saw it was cowered against a rail.”  — Alton Wahl

And even more ironic, a little over a week after bringing their new addition home, a kitten was rescued from the Crescent City Connection.

Wahl said, judging by how often this happens to cats, he wanted to tell Tiki’s story.

“I can’t believe somebody could do that,” he said of someone possibly tossing out the cat on a bridge. “This is someone who is sick, who gets some kind of sick thrill.”

If someone can’t keep a cat, Wahl said they should bring it somewhere like a shelter where someone could find it.

“It may not be the smartest thing I’ve ever done,” he said of rescuing a cat on one of the highest bridges in the U.S. “But I’d do it again.”

An overview of the school system’s 2019 United Way campaign was presented to the School Board at its January meeting. […]

All Kinds of Finds celebrating its anniversary, customers on Saturday

All Kinds of Finds by Karen is celebrating its five year anniversary this Saturday – and along with it, the customers who have made it possible. […]

Police are searching for a man who stole a St. Charles Parish police patrol SUV and led officers on a car chase across multiple parishes, after the suspect had been handcuffed and arrested for suspected drug use earlier that morning. […]