A bill moving to the Senate floor that would require public school districts to display “In God We Trust” in each of its school buildings may have been voted on unanimously by the Louisiana Senate Education Committee, but some local School Board officials haven’t embraced the move.

The bill, officially titled Senate Bill 224, would require school districts to have the words displayed no later than the 2019-20 school year. It was introduced by Sen. Regina Ashford Barrow, representative for District 15 in East Baton Rouge Parish. After the bill’s introduction, the Baton Rouge Democrat reported the measure was intended to combat a moral decay in schools, and that there was little discussion of the legislation beyond some senators praising the intent of the proposal. The bill passed a vote of the Senate Education Committee on March 22 and has moved to the Senate floor. 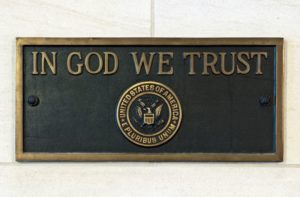 St. Charles Parish School Board President Alex Suffrin said he did not have a comment in terms of the board’s official stance, but that he thought the bill did not represent the best course of action.

“I personally believe that the objective of Sen. Barrow’s bill is better accomplished in the purview of the home,” Suffrin said. “Also, this would appear to be another unfunded mandate, imposing implementation on local government without providing any funding for the same.”

Ellis Alexander, District 1 School Board representative, said he could only speak for himself and not for the board as a whole, but he doesn’t agree that the measure would solve much, if anything.

“We have a great deal of diversity in our schools and we’d be offending people,” Alexander said. “We do not need to offend anybody. This is a case where they’re trying to close the gate when the horses get out. They’re behind on this.

“It would cause more trouble than it would alleviate … it’s going to make people uncomfortable.”

Alexander said nobody has approached he or his district for input on the matter, and though he said he understands the intent behind the bill, he simply disagrees it will have anything approaching the intended effect.

“I think it’s about trying to prevent shootings in schools. But I think it could incite people more than anything,” Alexander said.

He added that there are other problems that need to be addressed.

“Louisiana is 49th in the country when it comes to education,” he said. “It’s been like that. All these things they try to come up with and we’re 49th. We’ve got enough problems. They have budget problems and money is getting spent senselessly.”

Sonny Savoie, representative of District 4, said that his personal feeling was that it would be the wrong move.

“It’s another unfunded mandate that’s not necessary,” Savoie said. “You have to appreciate the thought and what they’re trying to do, but it’s out of place. If they want to do that with private, parochial schools, that’s fine. But we have a wide variety of people in our schools.

“My God may not be someone else’s God. I think it’s just not needed right now for us to act as Christians.”

He added he didn’t know of any government buildings that display the phrase.

“I appreciate what they’re trying to convey … the way things are going in society right now, it’s not Christian-like in some ways,” Savoie said. “But I don’t think it needs to be on the building. It won’t stop anybody from being religious or non-religious. It’s a feel good thing, but that’s all it is.”

National Signing Day in St. Charles Parish saw a celebration of two of its most prolific football stars as they prepare to move on to the collegiate level. For one, the destination has been known for months. For the other, there was a shift in course. […]

Jean Anderson Faucheux has been a part of her share of the Krewe of Lul’s parades. For her sister-in-law Victoria Faucheux Stephenson, not so much.Parade experience aside, though, they’ll have one thing in common when Lul rolls this weekend: they share the distinction of being the Krewe’s grand marshals in 2020. […]

All Kinds of Finds celebrating its anniversary, customers on Saturday

All Kinds of Finds by Karen is celebrating its five year anniversary this Saturday – and along with it, the customers who have made it possible. […]