Hannah Daigle admits she never thought she’d be here – and yet here she is.

The Bayou Gauche native and country singer sees her music on iTunes, Spotify and Amazon Music, and it hardly feels real to her. But her work is very real, and earlier this year, her first ever EP (extended play) was released and her songs available for the world to hear, the culmination of a dream born long ago.

“It’s all I’ve wanted for such a long time,” Daigle said. “I can remember singing when I started walking. I always wanted to sing … I never thought I’d ever have an original song out, that it would ever be possible, and it’s an unreal feeling.”

Daigle recorded the four-song record, titled “Everything Changes,” in December, traveling to New York to make it happen. She and her co-writer began putting the songs on paper two years ago, based on Daigle’s experiences, and the recording process was intended to happen sooner—COVID proved a setback. 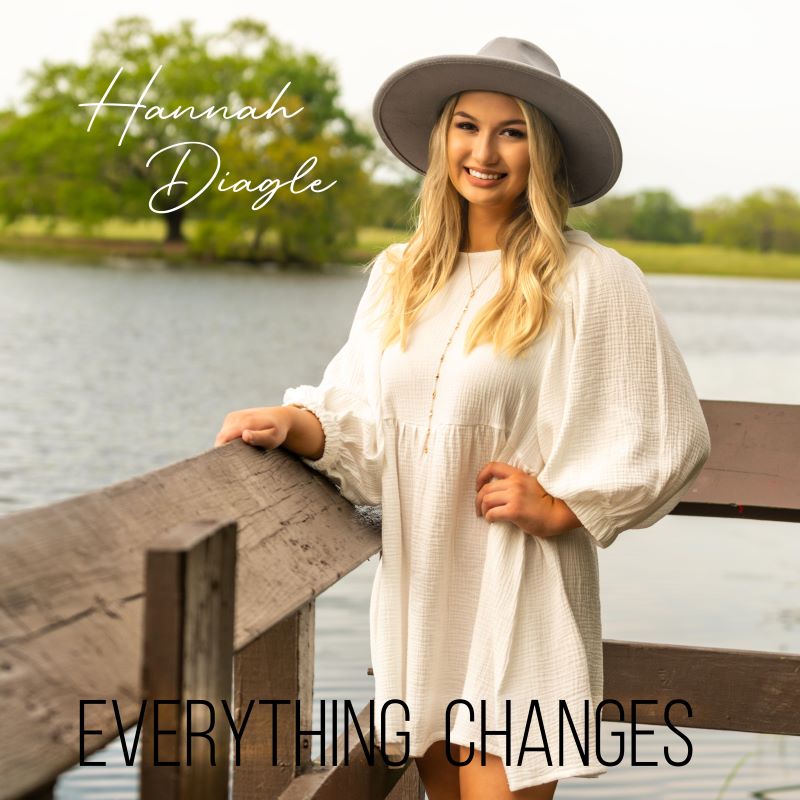 “We were all set to go, planning the trip, and then the week we were to leave was when the pandemic really hit,” Daigle said. “All of a sudden we’re learning all of the flights are cancelled and we’re going on lockdown. I really had no idea of what to expect.”

Being so close to such a big opportunity, the delay was not easy to cope with.

“It was pretty difficult … I was getting a little impatient,” Daigle said. “We really just had to wait it out, put some final touches on songs and see what we could do to make it better. I had to stay busy, otherwise, and not dwell too much on it too much.”

In some ways, it wasn’t the only detour Daigle’s taken on the road to singing.

As a toddler, she would sing all the time around her house, “at the top of my lungs,” and it prompted discussions between her parents as to whether it might be worthwhile to get her into voice lessons. It was a pass for the time being, but on a night out to eat with her friends when she was 14, fortune redirected her.

El Paso posted a video of Daigle singing to their Facebook page, which garnered some attention. Her mother reached out to someone about a vocal coach and sent the video, and Daigle began taking lessons.

“She was on the west bank … I started going there and she had discovered these people who had put together a program where you could go on retreat and they’d mentor you, guide you … I decided to venture out and do it, and just see what happens. I met all these awesome people from it and we kind of built a relationship.”

Daigle traveled to Nevada and to Florida to record some cover songs, and then the subject of writing some original music came up.

“We started cowriting all these songs and put together a plan for me to go record them in New York,” Daigle said. “And here I am.”

Her EP songs are titled “They Don’t Make ‘Em Like They Used To,” “A Little Crazy,” “The Life You Want to Live” and “Better Plan.”

“Those four songs represent what was going on in my life at the time,” Daigle said. “My main goal through all of it was to write songs people could relate to. Each song contains a special message toward that. So when people reach out and tell me they can relate to my music, it really means so much and that’s what makes me feel successful … that it was worth all the work.”

She says it’s all still taking a bit of getting used to when it comes to her music being released.

“I was a little nervous, to be honest,” she said. “I know personally, I find it hard to judge myself because you’re hearing your own voice, from your own perspective … so I had no idea what to expect from people. I didn’t know if they’d like it or feel anything from it.

“I’ve gotten so much support from people, both who know me and who don’t, and it’s been kind of shocking. It’s such an awesome feeling.”

Everything Changes is available on all streaming platforms.

Like so many young people in the St. Charles Parish community, Luling resident Paige Bartolo is grieving the deaths of three of her friends. […]