Completion of Bayer’s $975 million expansion of its Luling facility has been delayed nearly 15 months.

“Bayer has made the decision to shift back the completion date to the first half of 2021 based on multiple factors, including an unusually wet year, the overall size of this expansion, and being well prepared to meet dicamba grower needs for the 2019 and 2020 seasons,” according to Bayer Crop Science officials. 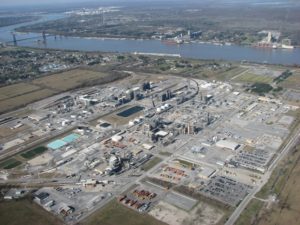 Bayer Crop Science is a division of the multinational Bayer that acquired Monsanto Co. in April of last year with U.S. Department of Justice approval.

In 2016, Monsanto broke ground for the expansion, which is planned to produce dicamba, a herbicide that will be included in a new product line called Roundup Ready XTend System.

The project is 50 percent complete.

The Louisiana Economic Development (LED) board approved the request.

LED granted the incentives in return for an expansion worth $975 million and 100 jobs, as well as 20 contractors.

Bayer, then Monsanto, employed 665 workers at the Luling plant at the time the incentives were granted.

Bayer Crop Science has hired 100 employees at the site and expects to hire another 30 workers when the plant opens. There are an estimated 1,000 construction workers daily at the location.

According to Bayer Crop Science officials, Bayer remains fully committed to the dicamba expansion at the Luling facility and the benefits it will bring to the local community and farmers globally.

🎺 Long before becoming band director and music teacher at Luling Elementary School, A.J. Pittman had an epiphany when he was just 8 years old – he wanted to play the trumpet. […]