Framed in warm pencil detail and soft colors, the sketch of the Smile Inn brought back memories for Brigitte Mentz.

The Smile Inn, a bar and dance hall that once stood in Des Allemands, was much more than a drawing to her. It was the place her grandparents, Paul and Jane Peyregne, owned and where she spent much of her childhood.

“I was told my playpen was there,” Mentz said.

She saw the drawing on a Facebook page named “Remember Des Allemands” and commented on it. Mentz recalled the location still being in operation when she was a teenager.

“I don’t drink beer to this day because of the smell of beer cans behind the place,” she said. “I can’t handle beer.”

But she welcomed seeing the old Smile Inn again.

It was one of three sketches of Des Allemands done by artist and architect Stan Routh, which also included the old volunteer fire station and old grocery store. 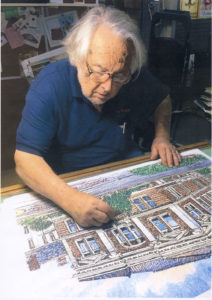 All are gone today, but they live on in Routh’s “Places People Remember” collection. He has nearly 5,000 images of historic locations in Louisiana, which he has been making since the 1950s.

“I’m an architect and been involved in historical preservation projects in the state,” Routh said. “I’m interested in architectural history.”

Routh, who has a master’s degree in history and design, has been recording country stores, little churches, old homesteads, mills, bridges, barns and many other structures in ink, pencil or watercolor.

The Des Allemands locations he’s drawn fit in with his collection.

These are not just images he sells, but memories of landmarks that shaped a community or town.

“I’m trying to capture as many of these places that mean something to people.” – Stan Routh

“When I go into an area, I look for significant structures,” Routh said. “In Des Allemands, it was that grocery, the volunteer fire department and the Smile Inn. Those are places that meant something to people. The structure was part of community life.”

Routh loves to draw, but he also wants to record history with a pencil instead of a camera. He wants all the details he can capture, which can be seen in his other sketches of landmarks in St. Charles Parish.

In addition to Des Allemands, he’s drawn the parish courthouse in Hahnville and Destrehan Plantation in Destrehan.

He also draws buildings he considers good design in the past.

Routh added, “I’m trying to capture as many of these places that mean something to people.”

Dangerous Woodlawn team headed to Destrehan for round two showdown

Peoples Health recently joined forces with Second Harvest Food Bank and the St. Charles Council on Aging to make sure that local senior citizens had everything they needed to properly celebrate Thanksgiving this year. […]