There’s something for everyone among what Stephen Weber calls an eclectic group of participants in this year’s Norco Civic Association Christmas Parade, likely one reason the annual tradition has been so popular among community members as a family attraction.

The parade will roll on Dec. 1, fresh on the heels of Thanksgiving Day and an especially early start for what’s annually been an unofficial kickoff event for the Christmas season. The theme for this year’s event is “Norco Through the Years,” with participants each encouraged to represent a decade of their choice.

“We have a ton of participants this year,” said Weber, the chairman of the Norco Civic Association Holiday Committee. “We’re really early this year, and we’re ready for it. We’ve been so lucky the past few years. I’m just amazed at the number of people who come out. It was packed last year … it’s a great family event and it’s all about celebrating the upcoming Christmas season.”

Weber estimates there will be between 10 and 15 floats in the parade this year. The Destrehan, East St. John and Riverside marching bands will be among those marching, as well as several cheerleading and dance team groups from community schools. Pageant queens will take the route as well. Some costumed characters will be in the mix: children eager to see, say, Batman and Robin will have their opportunity to do so, as well as the Star Wars 501 Legion for those hoping to see a glimpse of the Force in action.

Back to the dance groups: there will be dancers representing a range of age groups from 5 to over 50. One, the Alter Egos Steppers, are growing famous for their colorful wigs and fun-loving energy. 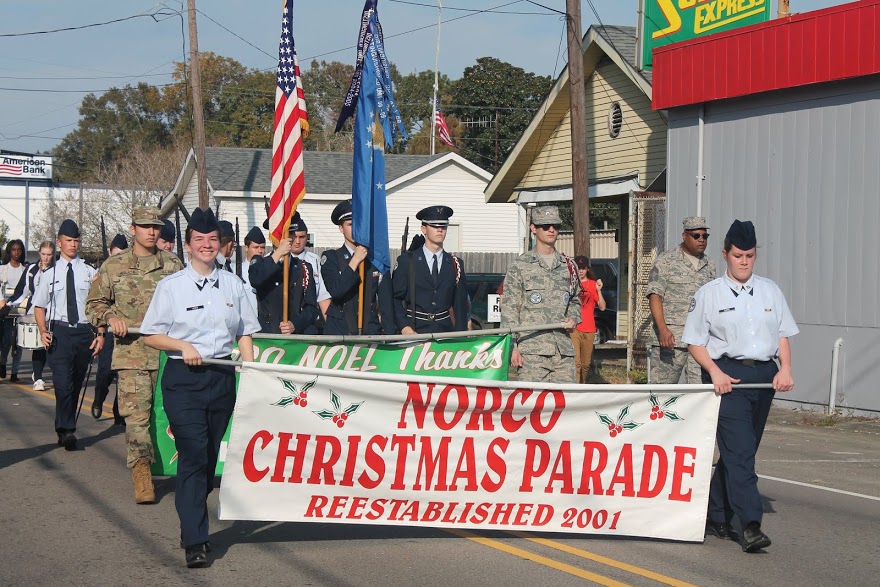 As always, Santa Claus will make his way to the festivities, making an entrance by helicopter and landing on the levee.  That will happen approximately 30 minutes before the official start of the parade, at 1:30 p.m., at the intersection of River Road and Apple Street. Following the parade, Santa will be available for those wanting to take a photo with him, free of charge, at the Community Christmas tree located next to the old bank building on Apple Street.

In addition, for the first time this year, Santa will be throwing special commemorative parade doubloons.

It’s a lot of moving pieces to organize, but Weber said there’s a lot of helping hands, including event sponsors Shell and Valero and ranging to others throughout the parish, from law enforcement and government to the community members who bring great energy throughout the route.

“Everybody is on board to make it possible,” Weber said. “You think about what the police department does for us, the parish government, public works, the Sheriff and Parish President, what they do to help us and make it a success … I think this event epitomizes what a community can do when they work together.”

Weber quipped there are those from far outside the Norco area who inquire about participating – or at least the Norco, Louisiana area. After all, there’s also a Norco, California, and that can be the source of some confusion.

Hence, there’s an unofficial open invitation to the Big Boy – the well known, smiley mascot of the Big Boy restaurant chain that has several spots in California, but none in Louisiana.

“We always get applications from out there,” Weber said. “We had an application from Big Boy and I had to tell them, ‘You know, we’re Norco, Louisiana, not California. But come on down!” 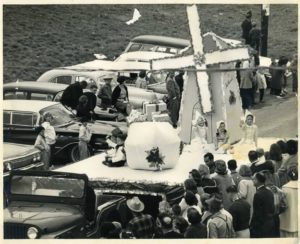 The Norco Louisiana parade traditionally runs the first Sunday of every December. It was discontinued after an approximate 30 year run from the 1950s to the 1980s. In 2001, a group of residents, including Weber, revived the event, which has run in all but two years, the exceptions due to weather. Past themes have touched on traditions, paid homage to popular music and movies, honored veterans and highlighted major events like elections and the Super Bowl in the community’s unique way.

“People here have always been so good about it,” Weber said. “I think it’s something everyone looks forward to.”

Ama man retires after 40 years on civil service board

James “Jimmy” Breaux, an Ama resident, fondly recalls how he first got involved with the St. Charles Parish Civil Service Board four decades ago. […]

“It’s absolutely wonderful. We love working with Becca. Giving her this platform to be able to reach young artists seems like such a winning combination. And being able to set Becca up with Sarah and build such a good following before the summer, the ball’s really rolling on it now.” […]

Craig “ Spike” “ Trooper ” Donald Guidry, 60, died on Monday August 23, 2021. He was a native of Des Allemands and a resident of Houma, Louisiana. Visitation will be held at Samart Funeral […]