Was on verge of death, but making progress after treatment

Near death and in dire need of help, Rosie the dog summoned what little remaining strength she had to draw the attention of Micah St. Amant, an animal control officer passing by.

“She lifted her head … Micah saw motion from a distance,” said Dr. Jena Troxler, St. Charles Parish Animal Shelter supervisor. “It’s unbelievable she had the energy to send off that signal. It was truly her last chance.”

Rosie was seemingly left for dead in a remote location, on a pit road near where Highway 3127 meets I-310 and in a pile of trash. Upon being brought to the animal shelter to receive medical attention, she was diagnosed with severe anemia, hookworms, whipworms, heartworms and extreme malnutrition. Troxler said euthanasia was a legitimate option for the suffering 1-year-old bully breed.

“Micah found me at the shelter and explained he had a critical case,” Troxler said. “She was truly bones … weak and limp.”

Rosie lifted her head again for a second as the two spoke to her. She ate half of a can of dog food and showed she still had some fight left in her.

“We brought her right into medical from there. We don’t give up on those that have a will to live and a potentially curable disease,” Troxler said. 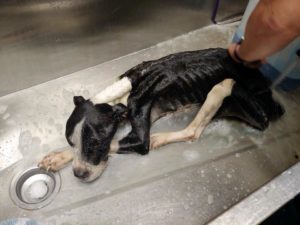 After an immediate blood transfusion, IV fluids, deworming and constant supportive care, Rosie found her boost on the path to recovery, though she still has hurdles to overcome.

Troxler said that initially the dog’s head was too heavy to hold up for even a few seconds, but now she can for minutes, and that intermittent blinking was essentially the extent of exertion Rosie could handle early on.

Troxler said this is by far the most severe starvation case she’s seen in her decade of shelter medicine practice.

“Each of the other 200 animals in our care every single day truly needs the staff, myself and the community as much as Rosie does because they were pets left behind.” – Jena Troxler

“As we worked on her for the first three hours, we checked her vitals frequently just to assure she was alive,” Troxler said.

It is suspected Rosie was abandoned, thus her starvation. Troxler said a primary reason animal shelters exist is to prevent illegal abandonment of pets and offer an option to provide care for the animals while searching for a new home.

She also said residents can do their part in preventing this form of animal cruelty by intervening to report cases anonymously.

“That can change the course of an animal’s life and avoid severe outcomes like this,” she said.

Not only is Rosie improving, but she’s become the namesake of this year’s Run 4 the Paws fundraiser event on Oct. 6, which has since been coined the “Run for Rosie” this year. The event was created by Vicki Cain, who volunteers regularly with the animal shelter, and will feature a 5K, food, music and local crafters selling pet inspired items. There will also be a unique fashion show in which the participating models will be walking the runway with dogs ready for potential adoptions.

Funds raised at the event go to the St. Charles Humane Society, which funds the shelter’s adoption program among other services. It begins at 9 a.m. and will run until 2 p.m. at the animal shelter in Luling.

“Giving locally, one can know it does directly go back to the dogs and cats in our care,” Troxler said. “They give us whatever medications are needed and we spend thousands on heartworm treatment alone. Rosie has that disease too and down the road she will receive treatment.”

Troxler said the ability to give a dog like Rosie a second chance is exceptionally rewarding, but that unfortunately Rosie is far from the only animal in need of great assistance.

“Each of the other 200 animals in our care every single day truly needs the staff, myself and the community as much as Rosie does because they were pets left behind,” Troxler said. “We are pulling out all the stops for this girl and thus far she’s responding very well.”

Monetary donations to Rosie can be made at www.stcharleshumane.org. To register for Run 4 the Paws, visit www.eventbrite.com/e/run-4-the-paws-runwalkadopt-tickets-48106607157 or e-mail race director Vicki Cain at vcain8157@att.net.