Dispatchers talk about what it takes to take the call

When Tracie Mathis answered the call, a panicked mother who was watching her son choke on a rubber ball was begging for help.

Following her training, Mathis calmed the mother down enough to walk her through giving him the Heimlich hug. Soon after, she got something 911 dispatchers rarely get – news that she had saved a life.

The dispatchers of St. Charles Parish’s communications center are technically the first ones on the scene, although it’s by telephone. They intervene in emergencies, gather the information that positions deputies, firefighters and emergency personnel on scenes that have ranged from an RV on fire at a convenience store to domestic abuse to murder.

“We do more than just answer phones … than what you see on TV or what you hear about,” Mathis, a resident of Norco, said. “We deal with the deaths in the families and sometimes we’re the last people that somebody talks to.”

They are challenged to step up to the technology, such as learning a variety of software programs that have made it possible to collect and provide information in minutes that can save the life of a resident or deputy entering a dangerous scene. A dispatcher remains calm to get that information, as well as aid people at a scene, and directs an emergency response within seconds of a call.

“You get to help people and save lives even though you’re not on the scene,” Mathis said. “The fire departments, the ambulance and police can’t do what they do without us. We’re the first people that our citizens have contact with in their most dire situations. That’s the importance of what we do.”

One of Mathis’ toughest calls came from a woman saying her husband was unconscious and not breathing.

“I walked her through CPR, but the problem was I could hear their two young kids crying in the background,” she said. “On the way home, on shift change, I had to pass that house. The ambulance and police were still there, and he didn’t make it.”

It was a tough day, particularly since the center’s dispatchers agree they do this to help people.

For Yvonne Green of Luling, a 12-year dispatcher, it’s hard not knowing what happens to the people they’ve tried to help. 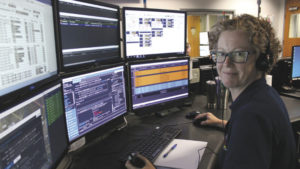 She’s handled calls from someone being sick and helping perform CPR or helping someone who wanted to harm him or herself.

For Green, the most stressful call is one where the caller in unable to provide information because they’re hysterical or have been shot and can’t answer vital questions needed to provide help.

“You keep talking to keep them calm, find out if someone else is in the residence with them,” she said. “You don’t get upset.”

Amid the high emotion of a call, Green said they have to get information for the deputy going into the situation.

Domestic violence calls can be hard when the victim calls for help but then doesn’t want to report it to a deputy.

“That’s a hard call because you’re getting them the help, but once they get there they change their mind,” Green said. “Sometimes, the officer will proceed if there’s enough proof to say something is there.”

One of her scariest calls came from a niece calling for help for her uncle who was found lying on the floor. The caller was panicked and finally named her uncle.

The call turned out to be from one of Green’s own family members.

“I knew,” said Green of receiving the call. “You always wonder, but it made me stronger.”

It also left her with a permanent resolve to treat every caller like a family member and with renewed determination to help people.

“I consider being a dispatcher a major part of my life,” she said. “I consider my coworkers family because I’m with them as much as I am with my family. I feel their pain. They feel my pain.”

Green said the public needs to know that helping people is their priority. She added. “I know that sometimes it doesn’t seem like we get there fast enough, but we’re responding as quickly as we can.”

“You get to help people and save lives even though you’re not on the scene. The fire departments, the ambulance and police can’t do what they do without us.”    — Tracie Mathis

“All of the dispatchers and the deputies take the calls seriously,” Price said. “This is a very serious business. Everybody is professional. I’ve never worked anywhere with such a team environment. Everybody is always paying attention to what each is doing.”

The calls can vary from an alligator on the road to someone locking their keys in their car to neighbors being too loud, Price said. A woman reported a two-foot snake in her house.

One of her more traumatic calls was from an elderly couple who reported their dog being killed by another, bigger dog.

“It was their baby,” Price said. “She was walking the dog.”

A recent call came from a driver reporting smoke at the RaceTrac in Boutte and more followed until it was determined an RV was on fire there, Price said. A deputy passing by pulled over and inquired as to how close the RV was to the gas pumps and then firefighters arrived to douse the blaze.

Dispatchers work 12-hour shifts, alternating one week with three days and then four days the next week.

“There are really intelligent, caring people working here who really care about our community,” Price said. “And we do our very best to get everybody help as fast as possible no matter what is going on. I think most of the people in our community get that, though. People are generally nice … even in a crisis.”

With a degree in mass communications and public relations, the Luling resident is in a career change, one that fit her desire to stay in her community and give back. She’s still in training, and it’s coming together as a welcome challenge.

More local shops to open as state heads into Phase 2

Luling resident Alex Harmon, who owns AH Esthetics in Luling, said it was a huge relief when she heard she would be able to open the doors to her shop under Phase 2 of the state’s coronavirus reopening. […]

Deborah S. Breaux, 55, was born in New York, raised in Waggaman and resided in Paradis. She entered into eternal rest on Sunday, May 24, 2020. She is survived by her husband of 37 years, […]