There’s a happy ending everyone envisions and hopes for when an orphaned pet or stray animal finds its way to the St. Charles Parish Animal Shelter: that it’s simply a step on the way to finding what shelter workers affectionately call “forever homes.”

A whopping 61 St. Charles shelter dogs and cats are on their way to living that dream, transported both on ground and through the air to their new homes. This impressive accomplishment occurred over the course of just seven days in May.

It became possible through partnerships and co-ops cultivated by the animal shelter and with like-minded organizations trying to match these orphan pets to their forever homes.

One such partnership is with Wings of Rescue, a non-profit that flies large scale transports of animals from overcrowded shelters to partner shelters in the north, where the animals are quickly adopted.

It enabled the St. Charles shelter to send 14 dogs for adoption in the middle of last month.

“From there, our relationship really blossomed, once transferring partners and receiving shelters learned our medical protocols and saw how we worked. We were invited again to participate in another flight,” said Allison Badgerow, Animal Control’s Kennel Officer.

This one went out a week later and carried 31 cats and six dogs to find new homes.

It’s a major lift not just for the animals, but the shelter as well. Badgerow said a high number of pets surrendered to the shelter in 2017 lengthened the average stay for dogs to more than 3 months and cats to more than 6 months. That prompted the shelter to reach out to both Acadiana Animal Aid and Wings of Rescue approximately a year ago.

“We wanted to find partnership with large flight abilities and a similar standard of care as we uphold,” Badgerow said, noting the Acadiana partnership came through a referral by Wings of Rescue. “It’s all about networking and finding shelters and programs with a shared vision.”

“It’s all about networking and finding shelters and programs with a shared vision.”— Allison Badgerow

It’s a positive result for all, with the local shelter able to find new homes for, often, their most familiar tenants while clearing space for newcomers.

Badgerow said those animals that have been at the shelter for weeks or even months are quickly adopted through the program.

“We’re told when the animals arrive up north there are approved adopters in line just waiting to find their companion,” Badgerow said.

To that point, before the second flight had departed, St. Charles shelter reps learned all of the pets on the first flight had, indeed, been adopted.

“Some of the receiving shelters have added adoption photos on their Facebook pages that we were able to share with our followers, but we expect more updates to come,” Badgerow said.

The shelter has also been able, through an assist from the St. Charles Parish Humane Society and United Way of St. Charles, to utilize a Jones Trailer to transport animals directly to partner shelters in Virginia Beach and Washington State. 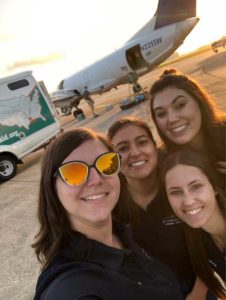 The Jones Trailer is a 28 foot air-conditioned trailer with 22 stainless steel cages with built-in drainage to make for easy cleaning. The trailer also has an exam table and running water should it be needed for sheltering. The Humane Society purchased the trailer with grant money provided by United Way.

The trailer allows the shelter to transfer for space, and it can also be used during catastrophic events to bring the animals to safety.