Student athletes across the country signed their official collegiate letters of intent Dec. 18, and in St. Charles Parish it was no exception. But the parish’s school system decided to expand on that concept a little bit, in doing so showing excitement and appreciation for several new teachers entering the fold.

Much like a traditional athletic signing day ceremony, new hires sat at a table at the Professional Learning Center in Luling with their soon to be signed papers in front of them. Breakfast was served just before the official start to the ceremony, when the signing commenced. Each teacher was introduced, members of the district spoke and a video was shown recognizing the importance of the profession.

The idea behind the event was to show an appreciation for those committing themselves to the craft of education and who have elected to do so for the students of St. Charles Parish. 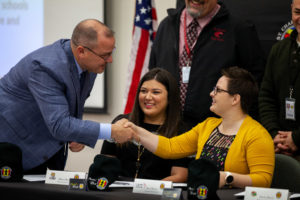 “Much of our society today has lost the perspective of the true value and significance of our teachers,” said Tobi Flair, human resources recruiting specialist for St. Charles Parish Public Schools. “The thought behind this initiative and event comes from a place of reverence and respect for educators. The fact that a human being on this planet chooses to  commit him/herself to a profession that requires selflessness, dedication, perseverance, vision, constant reflection, creativity and an innate drive to change lives … we believe that deserves not only recognition but celebration.” 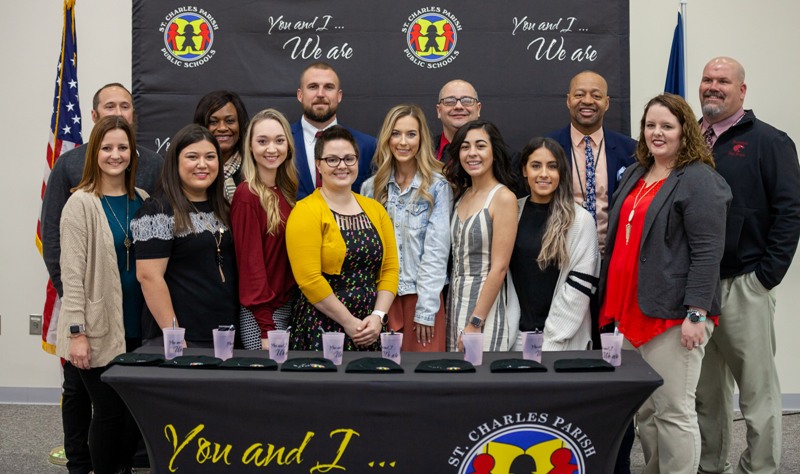 Meyers said she was “blown away” by the gesture and overall spirit the district has shown in welcoming herself and the other new teachers.

“ I have been looking forward to my first days with Hahnville High School and yesterday’s event set the tone for what I hope, and imagine, will be a wonderful working relationship both with the parish and the community I will serve,” Meyers said, adding she hopes the event will be replicated by other districts in the future.

Flair said the plan is for this to become a bi-annual event, with one occurring at the end of each Fall and Spring semester.

University supervisors and directors from LSU, Nicholls, Southeastern and LRCE (Louisiana Resource Center for Educators) attended the event and were recognized as well, Flair noting the school district’s university partnerships have cultivated a pipeline of career development in the education profession, with each college offering dual enrollment credits to high school students, and the district offering experience in the field in return. Six of the signees at last week’s ceremonies were student teachers in St. Charles Parish over the Fall semester.

We cannot put high quality, impactful teachers in our classrooms without the support and partnership of our Universities and Preparation providers,” Flair said.

The atmosphere at Wildcat Stadium Tuesday night exceeded what one usually finds during spring game fare: two of the state’s most talented – and dominant – football teams went out to test one another as Destrehan hosted Karr for scrimmage action. […]

For twin sisters Alex and Brit Lay, the coming years will bring a different kind of experience – with Alex headed to LSU and Brit to Louisiana Christian University, for the first time the two will be attending different schools. […]