Approximately 150 boats took to the water for a parade in Des Allemands Saturday, many of which displaying flags in support of President Donald Trump, and just about all adorned with the American flag.

The boating and fishing community was one of many around the country to see local residents band together in support of the president over the weekend, and those who participated said it made for a good time for all.

“I thought it was fantastic,” said Jesse Fonseca. “For everyone to come out and show support for our president … everyone was out cheering on one another and it made for a really great experience.”

Ann Marie Morvant said it was a strong turnout despite the fact there wasn’t much fanfare sought for the event, which largely spread via word of mouth and via Facebook group messaging.

“There were people from both inside and outside the community. As many people as we had here, there were some from the West bank and others from Chackbay and the Thibodaux area,” Morvant said. “The boats were all beautifully done. We had shrimp boats, to house boats, to big boats to little boats.”

Hungry out on the water? Not a problem.

“One person had a barbeque pit right there on his boat, flipping hamburgers. It was a really nice, pleasant time,” Morvant said.

The boats took off under the Des Allemands bridge, which was opened up for the event. From there, the group took the same route as the community’s annual Christmas parade, starting toward Mudlake, through Bayou Gauche and ultimately turning around to return to and pass through Des Allemands. 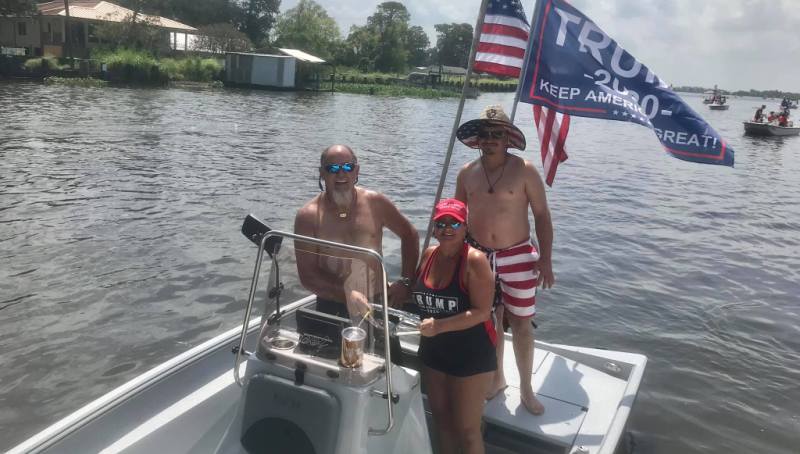 Those not in the parade were able to enjoy the festivities from land, outside of their homes. Many of the boats were decorated to make for a patriotic aesthetic.

“This was the first one I’ve participated in,” Morvant said. “It looked fun and that’s exactly what it turned out to be. The weather was great and there was no negativity.”

The latter point was a bit of a concern prior to the event. After the announcement of the parade was made public, organizers received some negative feedback from different sources and the decision was made to keep the event smaller and spread the word among locals privately, with political tensions high in the weeks leading into this year’s election.

“It’s very unfortunate and I wish things were different,” Fonseca said. “There’s not a lot of open support nowadays because you don’t know how the people around you may feel. I was really excited when I heard we were doing this here, though, for a community full of crab fishermen to come out on the water and show our support.”

Said Morvant, “It was so positive. It was all about unity. There were a lot of Trump flags but I think every boat had a USA flag.

“Anybody and everybody was welcome. The only thing not welcome was drama,” she quipped.

Fonseca and his dad took to the water in the latter’s crabbing boat.

“He had to have the American flag front and center,” Fonseca said. “I really think anyone, be it on the left or right, could have been here and really felt a part of things. It was about patriotism and coming together more than anything else.”

The Louisiana Department of Education has released 2021 Simulated School Performance Scores, and the St. Charles Parish Public School System fared better than most state education systems in a year altered by the pandemic. […]

Homegrown singer and songwriter Will Dempsey had quite the 2021, and he’s kicking off 2022 with the release of a new original song on Jan. 21. […]

Frances “Puddin” Lussan Greenfield, died on Saturday, January 15, 2022 at her daughter Mary’s home in Crosby, Texas, at the age of 94.  She was surrounded by some of her children and grandchildren. She was […]