Featuring Santa traveling by helicopter from the North Pole and more than 60 units, the Norco Christmas Parade will roll Sunday (Dec. 2).

This year’s parade theme is, “Santa Celebrates Our Local Sports” and the lineup will include two Who Dat trucks.

The parade has grown in popularity with Weber describing what he felt was a record sized crowd last year lining most of the two-mile route. He expects the same crowd or bigger this year.

Santa will arrive by helicopter at about 1:30 p.m., kicking off the parade shortly after landing on the Mississippi River levee. He will be available for photos with children by the community Christmas tree on Apple Street after the parade.

“We’re saving Santa’s reindeers a lot of work,” Weber said. “We’re picking up Santa at the North Pole so the reindeer will be ready for Christmas Eve.” 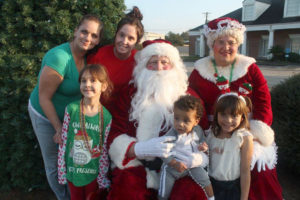 Weber thanks NYU Helicopter for giving Santa a ride.

“I think it’s pretty awesome to see that helicopter and seeing Santa waving on his way to the landing,” he said.

Weber said there will be Christmas throws.

The parade’s more than 60 entries will include 12 floats. They also will include dance groups, horse riders, antique cars and pageant queens.

Weber said Batman and Robin also will be among them, as well as a Star Wars group that has walked in the parade yearly and a Jeep Club.

“We do have a good time with it, and we just hope for good weather,” he said.

The United Cajun Navy will have a unit in the parade. Weber said they invited them to participate this year.

“We’re saving Santa’s reindeers a lot of work. We’re picking up Santa at the North Pole so the reindeer will be ready for Christmas Eve.” – Stephen Weber

The Norco Civic Association sponsors the parade, but Weber said Shell and Valero, the parade’s two largest sponsors, make the event possible. He also praised the St. Charles Parish Sheriff’s Office and the parish for also helping the parade.

“It is a great conglomeration of industry and people getting together to do something good,” he said.

MLK’s Dream continues to live on through annual march

The weather was cooperative for the 37th annual Martin Luther King Day March in St. Charles Parish on Monday, as a large group of participants came together to celebrate and honor the great activist’s incredible legacy. […]