It’s about taking the next step in life

Brian Young’s job is mechanical, but it comes with a profound sense of satisfaction over his students being so excited about DHS Robotics and S.T.E.M. initiatives that they keep working on projects after hours.

“We don’t just want to be great,” said Young. “We want to spark the interest of S.T.E.M to the younger kids, and we work really hard to do that. As long as we’re reaching younger kids, we feel like we’re doing a good deed.”

It shows in what Young has described as their “most prolific season in school history” with multiple wins in the region. These students also help inspire younger children to consider the program

Young, who teaches electricity and electronics at Destrehan High School, realized that all around him are children enthralled with technology like cell phones, flat screens or X-Boxes, but don’t often know how they’re designed or built.

This isn’t real world experience, and he’s about that in a big way in the classroom.

“Our robot embodies every aspect of S.T.E.M. from math to science in technology, and we hit everything,” Young said. “We use all those four letters. The robot is the final product.”

Some 22 years in a classroom at Destrehan High School has taught Young about the importance of students doing the First Robotics Team and S.T.E.M. camps taking them a significant level higher. Global studies show an estimated 75 percent of students who did it were more successful in the S.T.E.M. program in college, as well as helped guide them into S.T.E.M. career fields.

“S.T.E.M. is like the greatest program in the world,” he said. “It gives these kids a challenge and it strains the brain, and it makes them a more viable person who succeeds in the real world.”

And Young is about his students making it in the real world, posing a fine line between just quitting or thinking through the problem. But there’s also ensuring the quality of the product and meeting expectations, which the students respond well to in the class.

“In these camps and on my team, they can take what they learn and we supe it up and apply it to the real world,” he said. “We can design and trouble shoot it. You can quit and cry or you can fight through the problems and get it to work.” 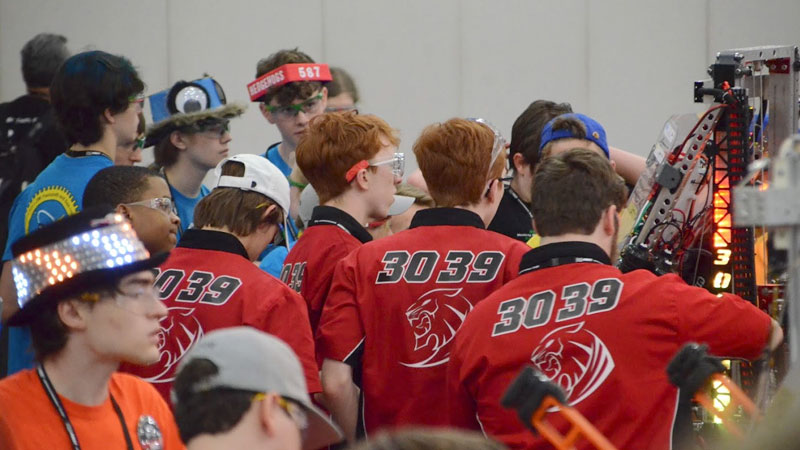 The team at work on their robot.With an engineering background and degree, Young knows firsthand why it works. Although he didn’t see himself becoming a teacher early on, he did come to see S.T.E.M.’s importance for students and also realized he loved teaching.

Young worries people may see him as cocky, but he feels strongly about others seeing his robotics team as a strong one. And he wants the team to legitimately feel the same inside, too.

“I try to send a real-world message to my students and telling them to look deep into the mirror at their inner soul and asking them, ‘are you the kind of guy that Shell or Valero would pay $100,000 to?,’” he said. “I try to motivate students who don’t want to do it, and give them more about life and how they can be successful.”

Much of this philosophy came to Young when he taught at junior college and witnessed men repeatedly coming there to up their careers because they were unhappy with doing what they were doing until retirement. They worked in chemical plants, but as painters or plumbers, and when he asked them why they were coming to school he got the same answer – “They realized this is what they’re doing until 65 years old.”

He wanted to pass this knowledge to his students in hopes they would not make the same mistake, and he’s seen it work even in the hard cases.

“I try to be brutally honest with them,” Young said. “It seems to have worked for me.”

“We don’t just want to be great. We want to spark the interest of S.T.E.M to the younger kids, and we work really hard to do that. As long as we’re reaching younger kids, we feel like we’re doing a good deed.”   —  Brian Young

Young conceded he could not make a student good, but he could motivate them to want to be good. Additionally, he realized how happy it makes him to see his students succeed.

“If they’re not happy, it hard for me to be happy,” he said. “Everybody has their day. I’m 59 years old and I’m not a spring chicken anymore, but when I leave I want people to say, “That guy there did a good job teaching our kids, promoting S.T.E.M. in our schools through the DHS robotics program and the S.T.E.M. outreach programs.’”

This DHS teacher believes he’s not ready for the pasture yet, but has a few more things he wants to do first. He’s reflecting on those successes, and can’t help but be happy when he see students coming every day to work on robotics.

“That’s their home,” Young said with pride. “They’re working on a new project and practicing on 3-D modeling skills. They’re working on a second robot for the Mississippi competition coming up next week. I think you know you’ve established a good culture when students still come to the workshop and still work.”

With employment a central concern amid COVID-19, local residents in search of work may look to neighboring Jefferson Parish over coming weeks and months as Houston-based Service Corporation International (SCI) announced it will be adding 115 new finance jobs to its Jefferson Parish offices by 2023, with 81 of those to be filled this year and next. […]

Dr. Ken Oertling, Superintendent of St. Charles Parish Public Schools, announced cancellation of all parish public schools for Monday through Wednesday of this week in preparation of Tropical Storm Sally. […]

by Majoria's Supermarket - 1 day ago

by Gulf Engine & Equipment - 4 days ago