To Nonney Oddlokken, the swamps of Louisiana are a mystical, alluring place with flora and fauna becoming iconic images in her artwork.

The St. Rose artist describes her concept as “magic realism,” and it has earned her a coveted spot in the international show, Prospect.4 with select people in locations with different satellite galleries and exhibitions.

Oddlokken’s work will be on display through Feb. 25 at the Brand New Art Orleans Gallery, 646 Tchoupitoulas St., New Orleans.

Brand New Orleans chose Oddlokken’s mixed media work through her paper tapestries called “Tiny Little Fables” where she incorporates Louisiana folklore into her visual story of the swamp is the white alligator. It’s the iconic image to me. You can’t get more iconic, more beautiful than the white alligator.”

The flora and fauna of these remote, natural wonders fascinate Oddlokken.

“They always have floral bouquets in their hair and often flowers as hair, and eyes circled – often a sign of enchantment,” she said of the nymphs in her collages. 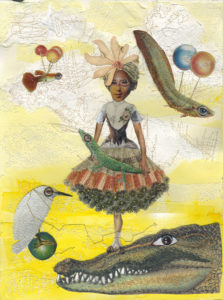 Oddlokken’s work has been featured in a number of shows, but Prospect.4 offers her international exposure and the kind she needs to stay on path as a professional artist.

Her passion for magical realism evolved from the time she spent with her aunt, who cared for her while her mother worked. Her aunt’s agoraphoric (fear of open spaces) tendencies meant she stayed home typically during that time, but Oddlokken’s imagination was illuminated and she considered a time when magic was in her house.

From her childhood memories came the groundwork for her imaginative art full of magical elements in every life. Becoming an artist was never a doubt because she’s known her path her entire life.

“I arranged the 64 crayons into color schemes,” said Oddlokken of her first box of colors. “The lights faded into the next color intuitively.”

She studied art in Norway and that’s where she met her musician husband. They came to New Orleans where she’s an artist and he performs music. She also teaches creativity and classes on hat making, as well as runs Curate Studios Art and Music Experience in New Orleans, an art market open once a month for handmade work.

Now, her efforts are starting to take off. Next year, she hopes to show her work in 12 galleries.

“That’s what I try to express in my art,” she said. “This magic we live with everyday.” 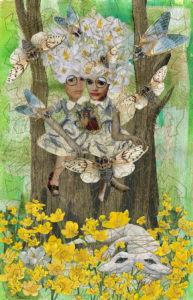 When she came to Louisiana shortly after Hurricane Katrina, Oddlokken’s work started embracing swamp creatures like the indigenous birds like the Roseate spoonbill and flowers.

“That’s when I really discovered how beautiful the swamps are,” she said. “I want Louisianans to be proud of who they are.”

A man is dead after suffering an apparently self-inflicted gunshot wound in Boutte Friday, according to the St. Charles Parish Sheriff’s Office. […]

Destrehan put together a dominant performance in all phases of the game in last week’s 49-0 home victory over visiting Bonnabel. […]