Jasmaine Smith, 20, recently returned from her modeling gig in New York Fashion Week where she did 11 shows.

“This was a big break for her and giving her exposure,” Isom said.

Smith, who goes by her father’s name, is making her own way like her brother, Donavon Isom, who goes by his mother’s last name, and is still a football celebrity from Destrehan High School, where their mother still teaches today. Donavan is working on his master’s degree in education in Texas.

While a DHS student, Smith modeled three years in the New Orleans Fashion Week, which is held once a year, Isom said. Now a student at Southeastern University studying mass communications, she is modeling in New York and has been invited back by a designer for a small show where she’ll model wedding dresses next month.

“When my daughter came out on the catwalk, she walks it like she owns it and I realized this was her calling,” she said. “I had to compose myself, remembering it wasn’t a football game and couldn’t yell.”

A proud Isom recalled the many compliments her daughter got from her work. 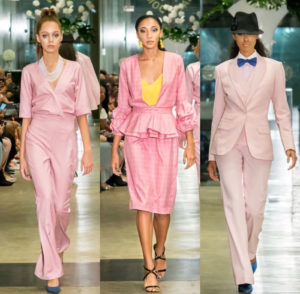 “I feel more confident,” she said. “This is my comfort zone. No shyness. When it comes to me being on the runway, I’m myself. It’s a different world. I’m just by myself doing what I love.”

Smith’s achievements are based on her drive and hard work.

“My daughter was definitely a girly girl,” Isom said. “Everyone thought she would play basketball because of her height (6’ 2” tall). She is taller than her mother.”

“She loves wearing makeup and she definitely gets that from her momma,” she said. “I can run to Walmart and I will make sure my face is made up. She definitely got that from me.”

She recounted a hysterical example of her daughter’s similar love for makeup.

“I can remember one time, in second grade, you know how they do their school pictures … I had her dressed,” she said. “It was picture day, but these are the ones you don’t see until they come in and then you decide if you want to keep them or not.”

“Oh my God, when I saw her picture … you’ve got to be kidding me,” she said. “My daughter with a friend went to the bathroom and put on pink lip stick and they let her take the picture.”

Bright pink lipstick was smeared on her face as she smiled proudly for the camera.

The move bespoke of her daughter’s love for primping, which has stayed with her and become an advantage in her modeling career.

“She’s gotten wonderful with makeup so much that I let her do my makeup,” Isom said. “She knows the makeup language. I just tell her, ‘Do your magic and you’re good.’”

With her photogenic looks, she has long enjoyed the spotlight.

But it was Smith being named runner-up as PreTeen Louisiana  in Lafayette years ago that her daughter knew her path.

“That’s when we started … from there,” Isom said.

As a junior high student, Smith started going to auditions and then attended modeling school where she was invited to New Orleans Fashion Week and that led to New York Fashion Week.

Isom has high hopes for her daughter, adding, “We’re just hoping it continues and she goes from New York to an agent and the modeling field.” But for this proud mother, the story is even bigger.

“I look at her pictures and I can’t believe this,” she said. “I’m a single parent with nothing who has a son who has graduated from a four-year college and now working on his master’s and he’s got another football scholarship and still a quarterback there. And I also have a daughter in college working on a bachelor’s degree in communications and walking on the runway in New York … all from this little single parent person right here.”

As teachers parish-wide learned this week about their approximate return dates to the classroom, one former teacher has made a point to help them maximize their arrival back on campus.   […]

Suspects are innocent until proved guilty in a court of law. Arrests • Rodric Shorts, 34, of 741 East Easy Street In New Sarpy, was arrested Oct. 7 and charged with battery of a dating […]