Callie Walsdorf retired as a library assistant at Lakewood Elementary School on April 14 and five days later she and her husband were on their yacht chasing a dream.

“I bought the boat to do the Great American Loop … to circumnavigate the eastern half of the continental U.S.,” said Jonathan Walsdorf, who is retiree from the St. Charles Parish Sheriff’s Office. “It was 181 days of every minute of every day of travel seeing something new.”

Jonathan had waited most of his life to make the 5,200-mile journey.

In 2016, they bought the 43-foot yacht – the Golfinho – that would take the Montz couple on the “The Loop.” They started with short tips at first, so when the big one came the couple was prepared for what was supposed to be the experience of a lifetime.

It began along the Gulf coast traveling down the coast of Florida up the east coast to Chesapeake Bay then to New York, up the Hudson River to Erie Canal to Detroit and then to Lake Huron, Lake Michigan and to Chicago. They continued to the Illinois River and went to the Mississippi, Ohio and Cumberland rivers to Pickwick Lake and then to the Tennessee-Tombigbee (Tenn-Tom) River Waterway to Mobile and back to New Orleans.

Walsdorf said it was a journey rich with new adventures every day.

They watched dolphins swim alongside them, manatees floating quietly to the surface to nibble on the marine growth on the boat, and lots of pelicans and egrets.

“Epic” was how he described the longest trip they’d taken on their boat. Walsdorf said the only difficulty will be topping it. They went through 64 navigation locks (35 of them alone were on Erie Canal). There were at least two days they were sailing out of sight from land, but the water was glass smooth making it easy to photo the dolphins escorting them so there were no worries over losing sight of the coast.

In the Great Lakes of Michigan, he added, “The water is so clear it’s like looking in your aquarium. It’s stunningly beautiful. Visibility is like 50 feet.”

The Walsdorfs stopped in about 100 towns, villages and cities along the way. 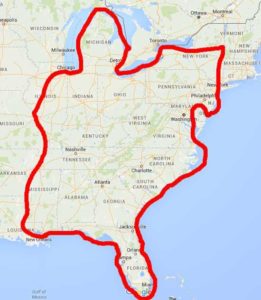 “The small towns were the most enjoyable places,” he said “The people were more friendly and more welcoming.”

They encountered stormy weather in Michigan and spent six days in the marina at Leland, a community of about 300 people, and were greeted with hospitality.

“We found gumbo file’ in a little grocery store about 1,200 square feet and a whole rack of Cajun spices,” he said. “It was cold … 46 degrees in the morning. My wife got the urge for chicken-sausage gumbo. We found Andouille flavored sausage.”

They ate well and learned it’s a social thing for the locals to visit the marina to “see who’s in town,” and it proved this Montz couple were popular along the route. Their vessel, which states they are from the Port of New Orleans, drew attention. ‘

“There were people who brought us baked goods and it wasn’t uncommon to be offered a ride to the grocery store or to do errands,”Jonathan said. “It was so refreshing.”

They made friendships they hope will be lifelong friends.

In Michigan, they met the sheriff and he knew St. Charles Parish Sheriff Greg Champagne from the National Sheriffs’ Association. There were also at least four times they met people from Louisiana on the trip.

One of their epic moments was in the Hudson Bay and being so close to the Statue of Liberty.

Another came on the way home as they passed the area where Jonathan used to fish and camp with his father on Rabbit Island in the Rigolets. He became emotional as he reflected on how his father instilled in him his love for the outdoors and why he enjoyed this trip so much. 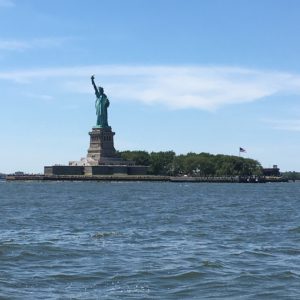 Being a member of America’s Great Loop Cruisers’ Association is also valuable for these trips, Jonathan said. Members have the option to travel together or meet at places along the route.

“It’s one thing to want to do something, it’s different to set steps to achieve it,” Jonathan said of achieving his dream.

For him, the dream became real when he bought the Golfinho and traveled 18 days from the Chesapeake Bay to New Orleans. Then it became a matter of waiting for his wife to retire and then a little more.

“My wife really wasn’t on board until the day we left,” he said.

Upon their return, however, she had a different view.

“She’s ready for the next trip,” Jonathan said. “She didn’t want to come home.”

But they are anticipating another trip, possibly to Key West

After all, they’re Loopers now and this adventurer is glad to add, “It’s an open slate.”

Paige Landry was packing for a beach trip when she got a phone call that has forever changed the lives of her family. […]