Todd Bourgeois saw the damage done to the trailer of his friend Ken Wetzel’s trailer and a phrase came to mind.

The tragic irony Bourgeois, of Luling, saw in the scenario was that for the better part of 15 years, his fishing pal Wetzel has worked through his ministry to assist in the recovery areas affected by major disasters and their residents. But not, Wetzel himself was in need of some help, his family’s trailer in St. Bernard Parish destroyed by Hurricane Zeta.

“He’s always helping others during times of disaster,” said Bourgeois, who has raised almost $2,500 through GoFundMe to help Wetzel replace the trailer. “I felt, really, that there was no other choice than to help him, however I could. It’s so ironic, because this has been his mission ever since Hurricane Katrina. He lost so much in that storm and it inspired him to start helping others.

“When you see a guy who is so giving, and who suffers a break like this, it’s frustrating to see it.”

Wetzel, a Mississippi resident, also lives part time in St. Bernard and is very involved in community efforts. Last week, he and his ministry fed 300 people who had suffered major loss due to the Zeta, via a jambalaya cookoff.

St. Bernard, of course, was one of the parishes most damaged by Hurricane Katrina. But it was Mississippi where Wetzel felt the storm’s wrath. Ever since, he made it his goal to help others get back on their feet.

The trailer he had in St. Bernard was destroyed by a tornado spawned from Zeta. It was one of numerous structures suffering serious damage.

“The tornado took a bunch of them,” said Bourgeois. “They moved (the trailer) right inside the floodgate of the wall levee area. You’d hope the wall would protect it, but it happened all the same. His flipped over two or three times. The boat right next door to him didn’t go anywhere, strangely enough. But they don’t have the money to replace that. I’m just hoping to raise enough to help them replace that and get him something he can use, that’s ready to go.”

The goal of the page (titled New Trailer for the Wetzel Family) is $7,000, the estimated cost to replace the trailer. Bourgeois is nearly halfway to that point, and says he expects he’ll keep the page open another week  before wrapping up the effort. 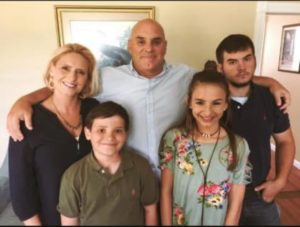 New Life Disaster Relief was established by Ken Wetzel and his wife Dawn following Katrina in 2005. The couple were among thousands who whose to ride out the storm – leaving would have been problematic, as Dawn was three months pregnant and her grandmother was in dialysis in critical condition.

As the storm passed through, water rose into their home, chasing the family to the second floor. The flooding reached that level as well, but before the worst could happen, the flooding receded. The family lost all they had, but also witnessed the horrors of other families that had lost family members in the storm.

The couple immediately secured and began helping to distribute MRE meals to others in their community. According to a story written for CBN.com (Christian Broadcasting Network), Wetzel came down with a serious staph infection from the rancid water he was exposed to, resistant to antibiotics. His leg was in danger of being amputated. He told CBN he made the decision within that “If I’m going to die, I’m going to die serving the Lord … if I was going to die, I was going to die with purpose.”

He survived after two years of treatment for the infection. The Wetzels haven’t stopped serving since.

New Life has been busy this year, including multiple visits to Lake Charles to assist in recovery following Hurricanes Laura and Delta, the former a Category 4 storm and both of which hit the area of 78,000 residents hard. Thousands of residents were displaced, homes went long periods without power, and it rendered businesses unable to operate – leaving the city’s people reeling.

Making matters worse was many may have felt their plight was forgotten at times, as 2020 seemingly has not lingered on any one disaster for too long.

“He was there tarping houses,” said Bourgeois. “They go all over the Southeast states lending help. Everyone knows how giving he is. He’s always helping and he’s just that guy who gives you a hand up.

“For me, that’s why I didn’t hesitate to try to do something and show we appreciate everything he does. If anyone is deserving of some help, it’s Ken.”

Tigers off to strong start on basketball court