An avid traveler, Khairi Appleberry has explored exotic places including Jamaica, Belize and Puerto Rico. Those trips, however, were nothing compared to the notable accomplishment she achieved this year – she flew to the top of the Destrehan High School class of 2020 and was named the valedictorian.

“Khairi Appleberry is one of the best students, and more importantly people, to have walked the halls of Destrehan High School,” a former teacher said.

“In my house, as I was growing up, I was always taught that it was hard work that gets rewarded,” she said. 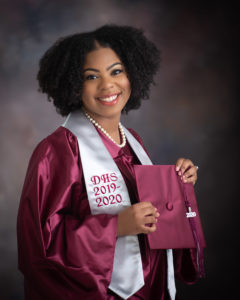 Appleberry’s hard work in high school was rewarded with a full ride scholarship to Xavier University.

“It has a really good pre-med program and they have really good connections with medical schools,” Appleberry said of her top choice school. “I expected to get a scholarship, but I didn’t know it would be a full one … I had only heard of people getting partial ones.”

“I’ve always talked about going to Xavier,” she said.

“I was interested in it because it’s highly unaddressed in America, and such a taboo topic,” she said. “I wanted to bring more awareness and have more conversations.”

The lack of health insurance and access to healthcare in the black community is a problem Appleberry said she wanted to bring awareness to. For her project, she assembled a community forum where she presented questions about what can be done to curb the issue.

She plans to study psychiatry at Xavier, and eventually attend LSU or Tulane for medical school.

“I want to open my own practice or work in psychiatry clinic that helps people … with and without health insurance,” she said.

Appleberry said she plans to explore the different clubs and groups Xavier has to offer.

“I wants to be well rounded,” she said. “Finding people with similar interests can help you with your journey.”

Indira Escobar hopes that people remember her as “the girl on fire.”

“This is a hunger games reference to Katniss Everdeen, who is deemed ‘the girl on fire,’” the Destrehan High School class of 2022 salutatorian said. […]

Alligator hunters, be on alert.

The Louisiana Department of Wildlife and Fisheries (LDWF) is currently accepting bids for alligator hunting on Wildlife Management Areas, U.S. Army Corps of Engineers properties and state wildlife refuges for the 2022-2024 alligator harvest seasons through June 30. […]

Accomplished grad has sights set on college, then medical school

Amna Aslam has her sights set on medical school now that her high school years have come to an end – years that, she said, were filled with wonderful teachers. […]

About Monique Roth 680 Articles
Roth has both her undergraduate and graduate degree in journalism, which she has utilized in the past as an instructor at Southeastern Louisiana University and a reporter at various newspapers and online publications. She grew up in LaPlace, where she currently resides with her husband and three daughters.
Website