She got to school at 6 a.m. and didn’t leave until 7 p.m. Even more remarkable is the fact that, even if the times varied slightly, she attended every day.

Megan Trahan, a member of the 2020 graduating class of Hahnville High School, has had perfect school attendance since pre-K. She has never missed a day of school since she started.

“I’ve always been an active learner, so I never wanted to miss school,” she said, adding eventually attendance just became a habit. “We would always take vacations over the summer or on Christmas break so I wouldn’t miss school.” 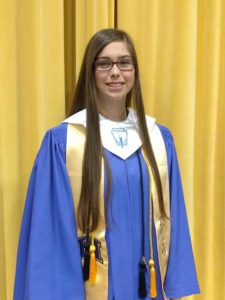 Trahan’s time in high school was spent juggling numerous extra-curricular activities, as well as serving in leadership roles in some of them. She said her favorite activity was band.

“I loved performing with them and learning new music and going to competitions,” she said.

The band traveled to different universities throughout the state for various festivals, and Trahan said being a part of the group led to making many friends.

“The good thing about band was no matter what class you went into, if there was a band kid there, you would always have someone to know and sit by and talk to,” she said.

Involving herself in as many activities as possible in high school was important to Trahan.

“It got me to be involved more and spread myself out so I would have more than one experience in school,” she said.

In the fall Trahan will head to the University of Southern Mississippi, where she plans to double major in forensic anthropology and forensic science.

“I’ve always been interested in crime shows,” she said. “It’s always piqued an interest in me, so as I continued to research, I took more interest in science classes … I really enjoy it.”

With her ACT score of 30, Trahan was awarded free tuition from the university. She also received a scholarship from HHS’s robotics team, the St. Charles Parish Rotary Club and was the 2020 recipient of the James E. Sierra, III Memorial Scholarship.

In college, Trahan said she is eager to explore college campus life, as well as look into joining a forensics association and winter guard group.

She also plans to join the ROTC at Southern Miss. Joining for the first two years of college serves as a trial period to further explore joining the military, Trahan said, adding it also gives participants the opportunity to become an officer in the military.

About Monique Roth 786 Articles
Roth has both her undergraduate and graduate degree in journalism, which she has utilized in the past as an instructor at Southeastern Louisiana University and a reporter at various newspapers and online publications. She grew up in LaPlace, where she currently resides with her husband and three daughters.
Website