A Social Security scam that has generated thousands of complaints nationally cost a Luling couple $15,000.

When Glenn Deroche’s phone rang on Nov. 19, he hung up sure he was being scammed and then the phone rang again. It wasn’t until the fourth call that the caller claiming to be with the Social Security Administration hurriedly told Deroche that he and his wife’s Social Security checks were frozen, as well as all of their assets. The caller further maintained his Social Security number had been used on 14 accounts in the United States and abroad on nine vehicle  registrations, and tied to money laundering in several countries and islands that they listed.

Bottom line: Deroche was told their assets would stay frozen until the thief was caught or worse.

Deroche, who is 66 years old, was mortified.

“When they say you’re identity is stolen that will stop you in your tracks,” he said.

The phone number appeared legitimate, although Deroche would later learn scammers can easily fake phone numbers. He also checked the status of their SS checks online and when he saw they appeared delayed, he panicked.

“They made it sound so real and said I had to do everything they tell me to do … leading me to believe we were going to lose everything,” he said.

The scammer told him the investigation required he cooperate fully and that all calls were being recorded to be used in federal court, as well as to help find the culprit and unfreeze his assets. Deroche said he was told, if he didn’t cooperate, he could be a suspect in the alleged crimes. In fact, he was among so many people in the U.S. also threatened by this scam that the U.S. Marshals issued an alert saying it’s not showing up at these people’s door.

As horrific an experience this was already, Deroche said the “nightmare” had just begun for him. 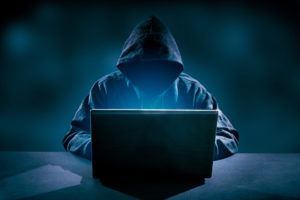 Per the scammer’s orders, he stayed on the phone with this person for hours. He was terrorized with allegations that the thief was often someone close or even family so he couldn’t tell anyone about this for 48 hours.

A horror-stricken Deroche did what he thought he had to do.

“I was told the only way I would have some money to live on was to go to the bank, take out cash and buy certain gift cards … all the while staying on the line with the ‘officer in charge’ of this case,” he said. “Then I had to give him the info on the cards so he could secure money for me in a type of Bitcoin. After this, he told me I could check the balances on the cards because I was having trouble believing him.”

He was then instructed to lock the physical cards in his vehicle so no one else could access them until two Social Security officers could come there and issue him a new Social Security card – all while still on the phone with the scammer.

“The whole time I am sick to my stomach … shaking with nerves,” Deroche said. “When he was finished with me, he had convinced me, using scare tactics, to take $15,000 out of my bank account.”

Deroche was then directed by the scammer to an Apple Store, Walmart and Winn-Dixie to buy gift cards, noting it felt like the caller knew him he had so many details about him. He was even given a story to tell store workers if they asked about the large sums purchased with the cards.

“He told me to say that I was giving bonuses to employees who had been with me for 15 years,” he said.

Only the Apple Store salesman questioned it and ironically told Deroche, “You know there are a lot of scams going around.”

After returning home, nearly two hours later, Deroche called the card companies. All of them had a balance of zero. He was told they’d been used in Costa Mesa, Calif.

Recently, Deroche was visited by an FBI agent who told him the scam apparently originated in Pakistan. He was also told it was unlikely he’d get his money back.

Since, he has become a member of Lifelock with Norton, which he hopes will protect them from future attacks.

Although he said they’ll be okay with the financial loss, Deroche said he was embarrassed over it. Even so, he decided he should warn others about the scam and, hopefully, help the to avoid his ordeal.

“I became a victim of a telephone scam,” Deroche said. “I always knew this would never happen to me because I was way too smart to fall for some crazy phone call, but I did.”

Once the ace of the Hahnville High rotation, Austin Perrin recently put the finishing touches on a fine college career at Louisiana-Lafayette – and a fine senior season, one that not that long ago hardly seemed promised. […]

A plate lunch benefit for the Appleby family will be held on June 25 from noon to 3 p.m. at the Paradis Fire Station, located at 807 Barber Road in Paradis. […]