Alaina Markey’s star shone bright as a theatre and choir member during her four years at Hahnville High School, and now the 2020 graduate has her sights set on larger stages and audiences as she enters college.

At HHS, Markey was a member of the National Beta Club, Culture Club, Fellowship of Christian Students and Athletes, National Honors Society, Spanish Honors Society and International Thespian Society: Thespian Troupe 7313. She also participated in talented theatre and choir, all while being a part of the Freshman Advisory Mentors.

And while she dipped her toes in a lot of extra-curricular pools, Markey said it was theatre and choir that were her favorite things to dive into.

Markey, who has also been interested in acting, was 10 years old when she stumbled upon Anthony Bean Community Theater as she was looking for a summer camp. She ended up participating in her first production – High School Musical – there. One of the performances fell on her 11th birthday. 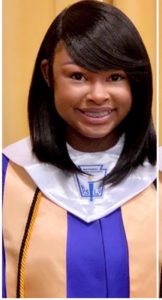 Since then, she has participated in three other productions at the New Orleans theater, as well as one each year at HHS.

While theater remained a main passion, Markey said she also loved choir at HHS. Occasionally she sings at her church, St. Anthony of Padua, as well.

Markey completed her senior project on sign language, something she’s been learning for the past nine years.

“I’ve also learned how to sing songs and sign at the same time,” Markey said. “My older cousin, Trell, had my little cousin, Quinn, in 2011 … she always wanted to teach her child sign language because she grew up with someone deaf.”

When Quinn was diagnosed with Klinefelter’s syndrome and chromosome 2 duplication, Markey said Trell officially started teaching him sign language because doctors said he would never talk.

“Now at 8 years old he talks everyone’s head off,” she said.

In the fall, Markey will head to the University of Louisiana at Lafayette where she’ll major in early childhood education and minor in performing art.

The decision to attend a school farther away from home than other available schools was tough, Markey said, because of her tight-knit family. Ultimately, however, she said she’s excited to get a taste of independence.

“Ever since I was little, on career day I would dress up as a teacher,” she said. “I love interacting with kids … it’s always been where I feel like I belong.”

Her biggest dream is to return home and teach in St. Charles Parish.

At UL Lafayette, Markey said she is excited to participate in the university’s theatrical productions.

“I feel like I’m very prepared,” she said of her theatre training at HHS, “but I’m ready to learn more … I’m sad to leave my friends, but I’m very excited to get to experience college and excited to make new friends and solidify who I am.”

Video game based on Norco, created by DHS alum released as downloads for PlayStation, Xbox

A Norco native and Destrehan High School alumnus lived out a dream when the video game he created highlighting his hometown, Norco, was released to the public and to critical acclaim. 🎮 […]

About Monique Roth 790 Articles
Roth has both her undergraduate and graduate degree in journalism, which she has utilized in the past as an instructor at Southeastern Louisiana University and a reporter at various newspapers and online publications. She grew up in LaPlace, where she currently resides with her husband and three daughters.
Website